Home ›
Our Pet Experts ›
Kristen Seymour ›
Best in Show at The National Dog Show Is ...

Best in Show at The National Dog Show Is ... 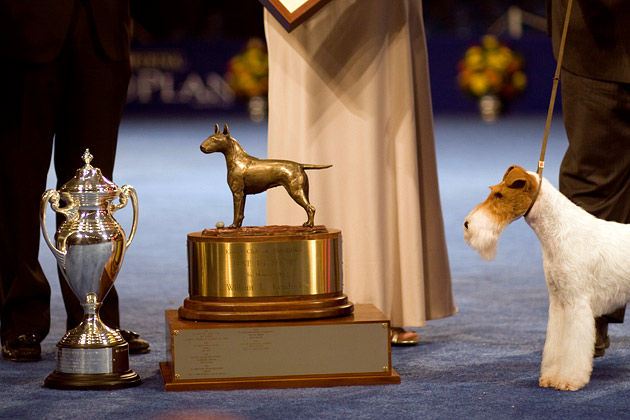 The National Dog Show Presented by Purina has crowned its winner, and the 2011 Best in Show title goes to Eira, a Wire Fox Terrier from Rialto, Calif., who is registered as Ch Steele Your Heart. She outperformed nearly 1,500 dogs, beating out the other group winners — the English Springer Spaniel, the Affenpinscher, the Australian Shepherd, the Dalmatian, the Bernese Mountain Dog and the Whippet. Eira's handler, Gabriel Rangel, is no stranger to The National Dog Show — two years ago, he won both The National Dog Show and Westminster with Sadie, the Scottish Terrier.

At 4 years old, Eira already has quite a bit of experience in the ring. In fact, this marked her 17th Best in Show. And don't worry, you'll see plenty more of her. She'll compete at Westminster in an attempt to become only the third dog ever to win both competitions.

Though Eira won the Terrier Group before moving on to Best in Show, there were several other National Dog Show Group Winners for 2011. They are:

Check out our photo gallery of the Group winners and all of Vetstreet's other National Dog Show coverage.