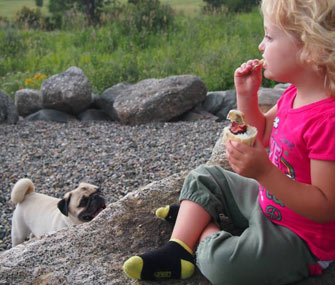 Courtesy of Mikkel Becker
Bruce hovers near Mikkel Becker's daughter, Reagan, in the hopes that she'll throw him a piece of hot dog.

My fawn Pug, Bruce, is a food addict. He’s not picky about what he eats; everything is on his meal plan. Bruce would look like a canine Jabba the Hut if I let him, but to his dismay, I am committed to keeping him at a healthy weight. It’s been a lifelong struggle — for both of us.

Bruce’s food issues were evident from the moment we brought him home. We put down a bowl of kibble as he came in the door, and in less than a minute it had vanished. Our puppy ate with such intensity that we thought someone had been neglecting to feed him.

No food was safe around the 8-week-old Bruce, even though he weighed only a few pounds. We had to monitor every morsel and use food puzzles and long-lasting chews to slow his consumption. Without intervention, Bruce would eat to the point of being sick; within a few moments, he would rebound and try to eat more.

I was so concerned about Bruce’s eating habits that I had my veterinarian father, Dr. Marty Becker, run a series of tests to see if there were any medical issues contributing to his persistent hunger. The tests all came back negative, and my father jokingly diagnosed Bruce with a severe case of “Hungry Pug Syndrome.”

Bruce’s food obsession lasted beyond the puppy stage; everyone who spends time around my now-6-year-old Pug has learned to protect their meals. Although Bruce responds readily to “leave it” and “drop it” — even when he’s being asked to walk away from something tasty — he is always willing to take advantage of unattended food.

Bruce is a nimble ninja when it comes to anything edible. He once outsmarted a doggy barrier in the car to get to an unopened bag of Doritos left on the front seat. An unattended plate of waffles in the kitchen inspired him to climb up a chair and onto the counter to finish the abandoned breakfast.

Bruce doesn’t wait until he’s left alone with food. His best trick is to pretend he’s sleeping — and then as soon as we turn our backs or leave the room, he pounces on our food. Sometimes he’s more daring though. At a recent family party, I was carrying Bruce around in my arms, like a baby. He appeared to be sleeping, complete with Pug snores and all, but he was really assessing the situation. I walked past my grandmother, who had a hot dog in her hand, and Bruce instantly went from asleep to attack. He took the hot dog right out of her hand and ate it in two quick bites. Bruce smacked his lips a couple of times, and then immediately returned to snooze mode as if nothing had happened.

While Bruce is not aggressive around food, he has learned how to get more than his fair share at any meal. He will use his blocky head like a bulldozer to push other dogs, like his Pug sibling Willy, out of the way. When an injured paw forced him to wear a protective cone on his head, he used the cone to shove Willy out of the way and then angled the cone directly above the bowl. In once instance, he even did a mini handstand on his front paws to get to his lunch.