Can Feral Cats Ever Truly Be Tamed? 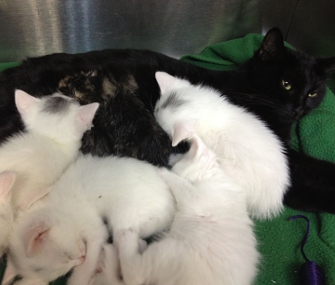 Can feral felines ever come home? That’s the question I constantly ask myself when confronted with yet another snarling cat freaking out in the back of one of those have-a-heart cat-friendly traps I keep in my backyard shed.

They’re all teeth and claws at the outset — almost uniformly. It’s enough to make you want to do a spay/neuter, and release them back where they came from.

Why so harsh? These are not your average house cats. They are no cuddlesome balls of fur. And hell hath no fury like a properly motivated feline — hence the desire to release them as soon as possible.

One Vet, One Bathroom — and Six Feral Cats

Consider the case of the feral cat whose fractured leg or fan belt injury requires longer-term incarceration than the standard TNR (trap-neuter-release) candidate.

Or ponder this scenario: A tiny, 8-month-old, black female kitten had been left at my place one Saturday by one of my TNR partners in crime (a very sweet but deeply destitute client) with the expectation that the cat would get spayed on Monday.

Unfortunately, this spitfire queen from hell made it impossible for me to remove her from her trap, so she could enjoy a more comfortable spot on a cushy blankie while she awaited her procedure. (Just so you know, I sustained a bloody scratch as part of this futile process.) Instead, the most that I could do was toss in some food and water a couple of times a day — and hope for the best.

Come Monday morning, it became evident that any hope I might have harbored for an expedient end to our relationship via ovariohysterectomy was not to be. She had birthed five, all white kittens, with teensy gray markings atop their heads. And — get this — they're all boys!

This is why I’ve had a feral kitty living in my home for the past five weeks, with all those adorable kittens in tow.

So how exactly have I managed to keep a wild animal in my son’s bathroom? With great trepidation, and not without significant effort!

The Feral Cat Way of Life

Feral cats can often be brought into the fold of general human companionship and even close conviviality.

According to the dictionary definition of “feral” as applied to cats, it means reverting to an untamed state from one of domestication. In other words, these are felines who, having lost contact with humans for whatever reason, took up with their own and formed social communities devoid of direct human contact.

But what we call feral cats in suburban enclaves like mine — highly populated South Florida — typically don’t fall under that definition. Not exactly. That’s because most of them depend, to a large extent, on the humans who feed them, thereby taking vital social cues from this positive interaction.

As a result, some feral cats seem relatively tame, while those who are more removed from human company will act more like wild animals than house cats.