Home ›
Our Pet Experts ›
Mikkel Becker ›
Can I Teach My Dog to Put His Toys Away?

Can I Teach My Dog to Put His Toys Away? 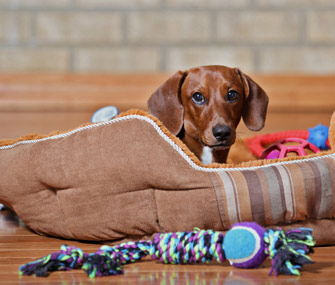 Thinkstock
If your dog knows how to fetch on command, he might be able to learn how to tidy up his toys.

Wouldn't it be wonderful if you could tell your dog to “clean up” and have him immediately gather up all the toys he has scattered across the room? Sound too good to be true? Maybe not! Keeping the home tidy can be a cinch for dogs who have been trained to pick up after themselves.

Admittedly, the training is a little more advanced than basic manners; your dog will need to combine several actions (picking up stationary toys scattered across the floor and placing each one into a toy box or basket). It also relies on your dog already knowing how to fetch. But dogs can — and do — learn this trick, and they often do it far faster than would be expected.

Ready to teach your dog to tidy up? Here’s how!

Teach Your Dog to Tidy

Dogs who are already familiar with “fetch” will typically have the most success in learning to tidy up. Once your dog is able to consistently return a tossed toy to you, it’s time to work on getting him to put it away when he’s done with it.

Start your clean-up training by tossing out a toy to get your dog’s attention (stationary toys are less likely to peak his interest). Stand slightly behind or to the side of the box or basket where you want your pooch to put the toy. Once he has picked the toy up, encourage him to move toward you.

To get your dog to drop the toy near — and eventually in — the box area, use a familiar cue like “drop it.” If your dog is used to dropping his toys in your hand, place your hand over the box — but when your dog lets go of the toy, move your hand to the side so the toy drops into the box. Immediately reward him so that he knows he’s doing the right thing.

If your dog is used to dropping his toys on the floor instead of in your hand, stand with the box at your feet. When your dog’s head moves over the box, mark and offer a reward. This will help him to connect dropping the toy — ideally, into the box — with getting a treat. Eager fetchers can be rewarded with the toss of another toy instead of a treat.

Repeat the process of tossing the toy and asking your dog to return to the box and drop the toy. If he drops the toy too soon, encourage him to pick it up and bring it to you. Reward him for every toy he gets in the box. Once he is consistently returning and dropping the toys in the box, start to fade out the cues that ask him to put the toy in the box (putting your hand over the box or asking for “drop it”). Continue to reward him for dropping the toys into the box on his own.

Add the “Clean Up” Cue

Once your dog has the hang of fetching the toy and returning it to the box, fade the toy toss by reducing the distance and intensity of throws and encourage your dog to start picking up stationary toys. Hints like pointing, verbal guidance and lifting a stationary toy slightly off the ground can help your canine along as needed.

Once your dog has gotten the idea, add a cue — like “clean up” — when you prompt him to start picking up his toys. Fade any extra hints, like standing near the toy box or pointing to toys on the floor.

Practice with a variety of different toys spread out in various spots — ideally, anywhere in your house your dog might play with (and scatter) his toys.

For some dogs, cleaning up is hard work; your pooch may (understandably) desire a reward for each successful toy return. Other canines with a proclivity for working and retrieving may find the task of tidying itself to have innately reinforcing aspects and may only need one big reward when the job is complete. For these pups, a game of structured tug, a food puzzle or ample praise and petting may be enough reinforcement.