Home ›
Our Pet Experts ›
Linda Lombardi ›
Cat Litter: How Was It Invented?

Cat Litter: How Was It Invented? 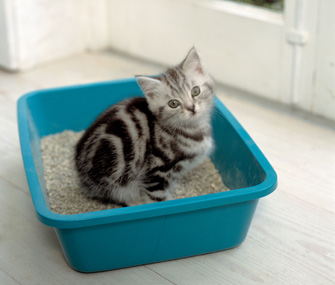 Cats have been living with humans for thousands of years. For most of that time, they came and went as they pleased, finding their own food and taking care of business out of sight — and smell — of their human companions.Nowadays the life of our cats is quite different. That means we have to deal with sanitation. So there's one man who probably deserves more credit than anyone else for making the modern feline lifestyle possible: the inventor of cat litter.

Before the mid-1940s, indoor cat boxes were filled with dirt, sand, sawdust, paper, and even ashes and cinders, which were common in a world where people still burned wood and coal at home. All of these materials would attract a cat to bury waste, but they didn't do anything about the especially unpleasant smell of feline urine.

This was probably less of an issue in the 19th and early 20th centuries, says Katherine C. Grier, author of Pets in America: A History. "In the past, there was a much higher tolerance for all kinds of biological scents," she says. The streets were full of horses and their waste, and other biological smells like human sweat weren't routinely deodorized out of existence. And in those days, even urban cats were still allowed to roam outdoors, so much of their waste probably didn't end up in the box anyway.

But as the 20th century progressed, cars were replacing animals as a form of transportation and society was becoming more fastidious. By the early 1940s, you could go to a pet store and buy the E-Z Klean Kitty Toilet, a paper-lined enameled metal pan that came with an optional privacy screen, but it still offered no solution for the smell.

From Sand to Clay

The timing was probably perfect for the accidental discovery made by Edward Lowe. As Lowe tells it in his autobiography, The Man Who Discovered the Golden Cat, his family's business sold sand, sawdust and granulated clay, which were used to absorb oil and grease in factories and machine shops. Lowe tried to market the clay as a nesting material for chickens, but the business never took off.

Lowe wasn't struck with some grand inspiration to use the clay for cats, though. For that we have to give some credit to the heroine of this story, a woman named Kay Draper. She was tired of her cat tracking ashes from the cat box all over the house, so she stopped by to ask Lowe for some sand. Since it was midwinter, all his sand piles were frozen, and he told her that sawdust would probably get tracked through the house just as badly.

"She stood there acting as if it were my obligation to solve her problem," Lowe writes, so he handed her a bag of the granulated clay and told her to give it a try. He had forgotten about the exchange until Draper came back two weeks later for more. Soon, her friends were asking for it, too. He decided to give the product a name: Kitty Litter.

Still, Lowe didn't immediately see the business potential: "Kitty Litter was undoubtedly a major discovery, but I, as its discoverer, wasn't aware of it at the time," he admitted. He was even afraid it might be a bit of a nuisance, distracting from his main business. At first all he did was make up a marketing slogan and tack it to his office door: "KITTY LITTER: Takes the place of sand, absorbs and deodorizes."

It was that last point that made all the difference. When Lowe eventually tried to get a pet store to sell the product, the owner was skeptical. No way would people pay 69 cents for a 5-pound bag of this stuff when aquarium sand sold for a dime! But Lowe proved him wrong, with the help of promotion ideas like providing free litter for cat shows, where the lack of odor with so many cats in one place was an impressive advertisement.

Granulated clay litter may have changed the way we live with cats, but once the idea was out there, inventors ran with it. Lowe's company continued doing research for decades to improve the product. Clumping litter was introduced in the 1980s, the invention of a biochemist who raised Persian cats, and the 1990s saw the invention of litter made of silica gel crystals. Now there are litters made from a variety of ingredients, including wheat, corn and recycled newspapers.

But the basic idea remains the same — sharing a clean, odor-free home with cats. Because Kitty Litter made this possible, Lowe credited his invention with making cats the most popular pet in America. He might be right, and he also has plenty to thank cats for in return: When he finally sold his company in 1990, a few years before he died, it was worth $200 million.