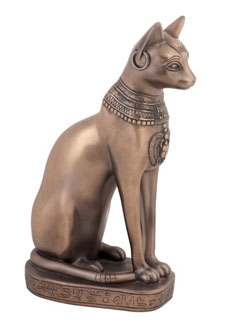 Dreamstime
The cat-headed Bast was one of the most popular goddesses in ancient Egypt.

Cats won’t let us forget that they were once worshiped for their mysterious ways. Bygone cultures crafted fanciful myths to explain puzzling feline behavior — curious stories that are still capable of sending a shiver through our souls today.

For centuries our feline friends have been both exalted and persecuted, thanks to popular tales of devil kitties, ancient gods and holy companions. In fact, I suspect that kitty snuggled on your lap still has some secrets to share! Although she’s likely not telling, I've gathered tales of some of history's finest feline lore — and spine-tingling superstitions.

The ancient Egyptians adopted the lion, the leopard and the cat as symbols of power and virility. But Mesopotamian cultures elevated the feline to god status. A city by the Nile delta, Bubastis, once worshipped a cat-headed goddess named Bast or Pasht, who was associated with happiness, pleasure, dancing and the warmth of the sun.

In China, Li Chou was a feline fertility god who received sacrifices at the end of the harvest, while ancient India’s cat goddess, Sastht, was a deity of maternity.

Early Europeans also had their feline icons: In Ireland, a cat-headed god was idolized during the 1st century, and a huge black feline named Iruscan — the “King of the Cats” — figured in Irish folklore.

Freya, the Viking goddess of love and beauty, even rode in a chariot drawn by “the most affectionate of all domestic animals, the cat.” The goddess was given power over the “ninth world,” which some historians speculate may allude to the supposed nine lives that cats are granted.

Buddhist, Burmese and Siamese cultures believed that cats acted as hosts for certain holy human souls after death. These select souls would inhabit the felines for the rest of their natural lives, thus allowing the departed soul to gain access to Paradise.

In ancient Japan, cats were revered and kept in pagodas, where they guarded over priceless manuscripts. Felines were considered so precious in the 10th century, in fact, that only members of the nobility could actually own them.

During the Middle Ages, people believed that if a black cat crossed your path or home, it was a sign of good luck. But this lofty feline status also had its downside: Sacrificial cats were commonplace — they were burned to guard against witches, and kittens were entombed in foundations to protect against rats. 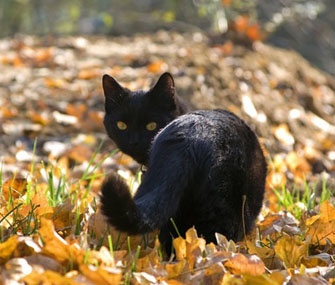 Dreamstime
In history black cats have symbolized both good and evil.

One of history’s earliest “evil cat” superstitions asserted that felines were vampires capable of robbing the breath of a sleeping child. The story may have stemmed from Hebrew tales of Adam’s hated first wife, the vampire Lilith. As the story goes, she took the form of a huge black cat named El Broosha. Her favorite prey: defenseless newborns.

The Middle Ages also portrayed cats as sinister creatures with all sorts of terrible, witchlike powers. Their teeth held venom, their flesh was poison, their hair caused suffocation and their breath infected human lungs with consumption (tuberculosis).

Back then, it was believed that cats could make beer go sour and that they carried souls to the devil. In Europe and early America, black cats were especially feared because black was the color of night and darkness — and therefore associated with all things evil.

According to French folklore, a strange white cat mewing on your doorstep foretells a speedy marriage. In southern England, it’s the black cat who’s a lucky wedding gift. If the feline sneezes within the bride’s earshot on her wedding day, good tidings will come her way. Just don’t step on the cat’s tail — unless you don’t want to marry that year!

Amy Shojai is a certified animal behavior consultant and the award-winning author of 23 pet care books, including Complete Care for Your Aging Cat. Shojai also appears on Animal Planet's Cats 101 and Dogs 101, as well as writes for puppies.About.com and cats.About.com. She lives in Texas with a senior citizen Siamese and a smart-aleck German Shepherd.