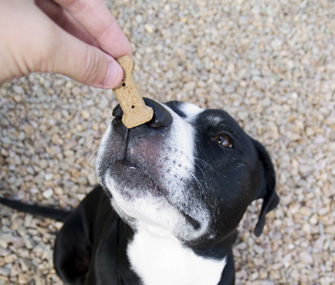 It’s been said that the only thing two dog trainers can agree upon is what a third dog trainer is doing wrong. However, even trainers who agree about the value of positive-reinforcement training often disagree about the best method to use.

One area of dispute is between lure-based training and clicker training. Lure-based training uses a piece of food to manipulate the dog's body into certain positions. Clicker training uses a sharp clicking sound to “mark” the correct behavior for the animal. Both clicker and lure training reward for correct behavior, most commonly by giving treats. Although some trainers will integrate these training styles, others stick strictly to one type of training — and all trainers think their approach is the best.

Here’s a very basic overview of both lure-based training and clicker training, including the benefits and drawbacks of both.

How it’s done: Lure-based training teaches the animal to follow a piece of food or, in some cases, a toy, in order to move his body. Lure-based training can quickly be used to teach a dog basic commands, such as sit, down, stay and heel. Luring can also be used to teach tricks like roll over, play dead and beg. This kind of work often uses a marker word such as “good” or “yes” to let the dog know when he does something correct. For instance, when teaching a sit, the word “good” may be used to mark the motion of a dog’s head moving back to follow the food, causing his hind end to go down, which is then followed by delivering the food reward.

Benefits: It quickly teaches a dog to do a specific behavior, such as a sit or a down. It is easy for pet owners to pick up simply by watching a trainer’s example, and little explanation is needed. Most dogs also quickly catch on to the concept of following food. Easily distracted dogs in high-stress situations, such as an obedience class, are often more able to focus when a treat is in front of them. The use of lures also can easily be turned into hand signals for a dog to follow, allowing the treat to be phased out.

Drawbacks: Many owners will always need food to get their dog to go into a position. For instance, many lure-trained dogs will only go into a down if they can see a treat in their owner’s hand, and often the owner has to bend all the way to the floor with the treat. However, this can be prevented if the treat is faded at a fast rate, first by removing the treat from the hand and having the dog follow the hand alone, and then substituting a hand signal or voice cue without any treat at all. Dogs who learn strictly with lure-based training may not be as creative with their behaviors or as successful with problem solving as dogs trained using other methods. It’s also difficult to teach more complex tricks with luring.

How it’s done: A marker signal, most commonly the clicker, is used to pinpoint the moment a dog does something right. For instance, a sit can be taught simply by marking with a click the moment the dog’s bottom hits the floor. Once the dog is doing a sit with a high enough frequency, the cue ”sit” can be added to get the dog to associate that cue with the specific behavior. Other times the behavior is shaped, which means the behavior is taught gradually over a series of small steps. Shaping can be done by teaching a dog to target an object with his nose, which begins by clicking the dog initially for looking at the object, then for gradual movements toward the object, and eventually for touching the object with a body part, such as the nose. Targeting can also be used to teach behaviors such as roll over; rather than the dog following a food lure, the dog learns to follow the target, such as a wooden spoon, to manipulate his body in the twisting position on the floor. Just as in lure-based training, the target is also faded quickly.