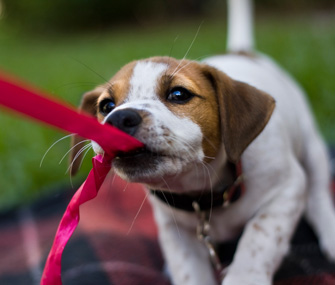 Very young puppies are so cute, it's hard to imagine that within a few months, they'll graduate from their "I-just-want-to-please-you" stage and enter their "You-can't-stop-me!" stage. As with children, testing boundaries is a part of growing up for dogs; so is getting into mischief. Your job is to keep the worst temptations out of your puppy's reach, but realize that he will probably come up with something you never even imagined.

Use Play to Foster Good Behavior — Not Bad

Well-intentioned owners sometimes create behavioral problems by inadvertently reinforcing or encouraging the wrong behaviors. Cute puppy behaviors may be tolerated or rewarded, but the same behaviors may not be so cute in an adult.

Play that involves biting or chasing may or may not create ongoing problems with adult play biting, playing keep-away with stolen household objects or playing catch-me when called. Competitive games can increase a dog’s confidence and readiness to stand up to a human competitor; in most dogs, these do not develop into problems, but in some predisposed dogs, they don’t help matters. Owners can prevent some problems by controlling the situation — that is, by teaching the dog to stop tugging or running when told to. Once the dog gives up the toy or stops his behavior, the toy can be thrown and the game continued. Play is important between owner and dog, but the person should be the one to call the shots.

Banish Bad Behaviors Before They Start

Besides stealing and playing keep-away, common puppy behavior problems include lack of house-training, hyperactivity, nipping, chewing, eating feces and getting sick in the car.

Lack of house-training usually stems from giving the puppy too much freedom too quickly. You need to go back to basics like crate training or at least restricting the puppy's access to parts of the house when you can't be with him. Many puppies urinate when they greet their owners; this is called submissive urination and is not a lack of house-training but a lack of confidence. Most puppies grow out of it, but meanwhile, do what you can not to intimidate or excite the puppy — or at least make sure you're outside when you do!

Hyperactivity is probably just part of being a puppy. Puppies of some breeds are naturally more active than others, but all healthy puppies should be active. Be sure to let your puppy expend his energy a few times a day, but never force him to exercise in the belief that it will tire him out even longer. This can be bad for his developing joints. A good way to tire out a puppy is to teach him some obedience exercises or tricks, or take him to obedience class, before naptime.