Common Health Conditions to Watch for in Your Puppy 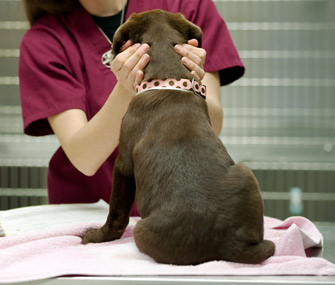 Communicable diseases, such as canine distemper, parvovirus and rabies, can sicken and kill puppies who are not properly immunized. All puppies should receive a series of core vaccinations starting at 6 to 8 weeks of age and repeated every three to four weeks up to 16 weeks of age.

Intestinal parasites are a common condition in puppies. Even puppies raised in pristine environments can acquire worms from their dam because some worms stay dormant in her body until hormonal changes brought on by pregnancy activate them. Your veterinarian can diagnose intestinal parasites from a stool sample and prescribe appropriate treatment.

Cleft palates can be detected in newborn puppies because milk bubbles out of the nose when they attempt to nurse. Your veterinarian can advise you about hand rearing such puppies and the possibility of surgery.

Hernias are not uncommon in puppies. An umbilical hernia is a bulge where the umbilical cord was; an inguinal hernia occurs in the groin area. If the bulging area can be pushed back inside the puppy, it is termed reducible. If it cannot be pushed back, it is non-reducible. A hernia that becomes strangulated (a loop of bowel or other abdominal structure gets trapped in the hernia) may require emergency surgery. Otherwise, most hernias can be surgically corrected at the same time the puppy is spayed or neutered.

Undescended testicles, or cryptorchidism, may occur on one or both sides. If the testicles have not descended into the scrotum by 16 weeks of age, there is a good chance they never will. Undescended testicles are more prone to cancer and other complications and should be removed surgically.

Retained deciduous (baby) teeth occur frequently in puppies, especially those of toy breeds. The canine tooth (fang) is the tooth most commonly retained as the permanent tooth grows in alongside it. If it remains, it may affect the position of the permanent tooth. Your veterinarian may elect to surgically remove the retained tooth, especially if it's still there at 6 months of age. Many veterinarians radiograph the area before removing a tooth to make sure a permanent tooth is present to take its place.