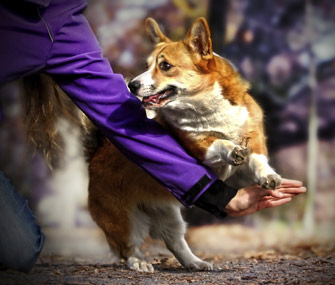 What do the musical compositions "Waltzing Matilda," "You're the One That I Want" from the hit movie Grease and Mozart’s “A Musical Joke” have in common? They have all been used to soundtrack some intricately choreographed freestyle routines. In other words, they're tunes that pet owners choose when they dance with their dogs.

Nicknamed “the tail-wagging sport,” canine freestyle — also known as musical freestyle or heelwork to music — is a choreographed routine set to music that comprises athleticism, creative costuming, teamwork and stylish interpretation of the music’s theme. Now in its 25th year, the sport incorporates elements of traditional canine obedience exercises — such as heeling — and the equine practice of dressage, often described as ballet for horses.

Freestyle may be perfect for dogs who excel at walking on their hind legs, backing up, spinning, rolling and jumping. And it’s perfect for people who like to have fun with their dogs. Of course, check with your vet first to make sure your pup is healthy enough for this activity before embarking on your musical journey.

How do you know if your dog can do the two-step? Most dogs who participate in freestyle tend to be quick learners with nimble bodies and a love of attention. Breeds frequently seen in freestyle competitions include Australian Shepherds, Border Collies, Golden Retrievers, Poodles, Papillons and Dachshunds, but you’ll also find Great Danes, Mastiffs, Rottweilers, Greyhounds, Salukis and Shar-Pei dancing the night away. People have even trained blind dogs and three-legged dogs to freestyle. With a little basic training, any dog can get moves like Jagger.

You may have heard the saying that Ginger Rogers just did what Fred Astaire did — but backward and in high heels. As hard as that sounds, imagine the prowess it takes for a dog to walk backward on his hind legs. Many dogs can do it, though, and some are really good at it.

Freestyle builds on a dog’s natural moves, including spins, rolls, jumps and bows. Dogs learn to spin clockwise and counterclockwise, to jump through or into a partner’s arms, to bow before a waltz and to place their paws on a partner's arm or back. The only limitations are the trainer’s skills and the dog’s abilities.

Take heeling: Simply walking at a person’s side can take on myriad forms, all of which can be incorporated into a freestyle dance routine. A dog can heel forward, backward and sideways. Then there’s left heel, right heel, face to face, dog and person facing forward, dog behind person, rear to rear, cross body, and perpendicular. The dog can weave between the human's legs in a figure 8. The possibilities are numerous.

One of the keys to a successful routine is the music — and some dogs seem to be particular about their tunes. If you’re a country and western fan and your dog likes disco, you might not be a match on the dance floor.