Home ›
Our Pet Experts ›
Linda Lombardi ›
Coyotes in the City: What You Need to Know

Coyotes in the City: What You Need to Know 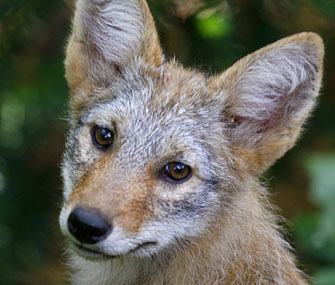 Photo by John Harrison/ProjectCoyote.org
Coyotes are moving in to several urban cities such as New York and Chicago.

If you live in a city or suburb, the only canines you expect to see are people's pet dogs. But more and more, one of their wild relatives is enjoying the benefits of urban living: Coyotes have been sighted in Boston, New York and San Francisco;they've become common in Los Angeles; and a long-term study in Chicago has radio-collared at least 250 of them and estimates there may be up to 2,000 in the metropolitan area.

Chances are that there are coyotes near you, too, even if you're not aware of them; they're smart, adaptable and good at not being seen. "They've figured out living in close proximity to us that people are potentially dangerous," says Gina Farr of the nonprofit Project Coyote. "They travel at times when there are not as many cars out. They figure out the best survival routes through our cities and the times when they can avoid people."

Given the risks presented by humans, why would coyotes want to live in a city? For the same reason we do: Everything they need is easy to find there, especially food."Coyotes can eat everything from roots and berries to leaves and fruit — they can even climb trees to get at fruit at the top of trees — but their favorite food is rodents," Farr says. "So it's not a long stretch to imagine what they've managed to find as delectable in our cities."

Coyotes do eat a certain percentage of our trash, and you can't blame them — Farr remembers a phone call about seven coyotes who had found a supermarket dumpster full of rotisserie chickens — but they're mostly in cities because there's no shortage of their preferred prey: rats and other rodents. "There's an unending supply of their favorite treats," she says. "We actually provide quite the smorgasbord for animals that are smart and evolutionarily fit enough to take advantage of what we create."

Historically, humans have also done coyotes another favor: We eliminated the competition. Wolves prefer forests, and because they kill coyotes, wolves kept the coyote population mostly confined to the plains. But then ranchers and farmers started to exterminate wolves and cut down trees. "As we killed the wolves and cleared the forests, we opened an expansion of opportunities for coyotes," Farr says, including a move into more urban areas inhabited by humans.

Though they like what our environment provides, coyotes don't have much reason to like us. In rural areas they've long been exterminated as vermin, and encountering a city slicker who panics can have the same result. But Farr says that killing or removing coyotes isn't the solution. Instead, she says, humans and coyotes need to learn to live together.

First, Farr says, remember that coyotes are not as big and scary as you probably think — they're leggy and tall, but weigh only 18 to 35 pounds. "Some times of year they might have 5 inches of hair, but get them wet and they're just a little sliver of an animal," she says.

Though coyote attacks get a lot of publicity, they are rare given the size of the coyote population. But to successfully coexist, we need to make sure coyotes don't get more comfortable around us, for both our safety and their own. "They're very smart and trainable. Every encounter trains them how to act around us," Farr says.

In order to avoid dangerous encounters, experts recommend "coyote hazing" — knowing how to scare coyotes off so they learn to avoid people. According to the Humane Society of the United States, hazing consists of using deterrents, such a noisemakers, small projectiles or a hose, to move the coyote out of a specific area (your yard, for example).

Project Coyote's Coyote Hazing Field Guide, which offers detailed instructions for hazing, recommends that you stand your ground, make eye contact and "advance toward the coyote with your hazing tools if there is hesitation on the part of the coyote." Make yourself as big and noisy as possible, and don't stop until the coyote is gone."The coyote may run away but then stop after a distance and look at you," the Humane Society literature advises. "It is important to continue to haze the coyote until he completely leaves the area." Farr adds that the goal is to teach the coyote that he is not welcome in a particular space. "We want to reinforce boundaries between what's acceptable coyote behavior and what isn't."