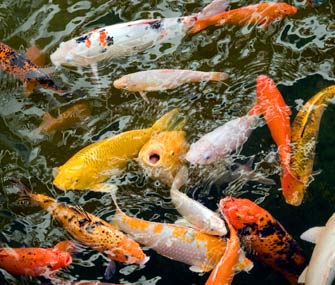 There are lots of decisions to make when planning a backyard pond: the size, the location, the landscaping. But before you go too far, don't forget the most important question: Who's going to live there?

Whether you're interested in keeping ornamental fish or attracting wildlife — or are hoping to do a little of both — you need to think ahead about the needs of these creatures.

Any backyard pond will need access to electricity. You may be able to do without filtration if you're not going to have fish, but you'll still need a pump for a water feature like a waterfall or fountain. Even for native wildlife, you can't just dig a hole and fill it — the water needs to be in motion. "Natural bodies of water do have a flow," says David Mizejewski of the National Wildlife Federation. "Even something that doesn't look like it's moving, like a marsh, has a flow of water."

A moving water feature helps with aeration, and if you live in a cold climate it will also keep the surface of the pond from freezing over completely in the winter. Both are important for maintaining water quality.

Goldfish and koi — those large ornamental carp beloved in Asia — are related, but have some differences that may surprise you.

It's more difficult to keep aquatic plants with koi, which tend to dig around and disturb roots. Goldfish are much more plant-friendly, and plants are important in a pond for more than aesthetics. "Plants help filter and clean the water and shade it so you don't get algae blooms," says Mizejewski. The result is that with koi, more sophisticated water-filtration systems are usually necessary.

Another difference is that goldfish will stop growing before they get too big. "They'll grow to fit their environment," says Jon Sander of Lilypons Water Gardens in Maryland. Koi, in contrast, keep growing all their lives, so unless you have a large pond, you'll need to have a plan for when they get too big. (For this reason, Lilypons has a "retirement pond" where people can return their fish if necessary.)

Fancy varieties of goldfish will generally do fine in a well-kept pond, says Sander, with one warning: They're more vulnerable to predators. Even in a city, your pond may attract raccoons, fish-eating birds like herons, and even snakes. "The more bulbous, less-streamlined fish are going to be easier to catch because they can't swim as fast." So if you go beyond the basic model of goldfish, make sure to provide plenty of hiding places.

If you're hoping to attract native wildlife like frogs and turtles to your pond, they'll need a way to get in and out of the water. When building a new pond, you can incorporate that into the basic design. "Create a shallow graded shoreline, so animals can get in and out," says Sander.

An existing pond may not have this feature, but you can place plants around the edges to provide access routes. "Even better, have some kind of branch or log that sits on the shore and extends down into the water so animals can climb in and out that way," says Mizejewski.