Home ›
Our Pet Experts ›
Linda Lombardi ›
Do Cats Have a Sixth Sense?

Do Cats Have a Sixth Sense? 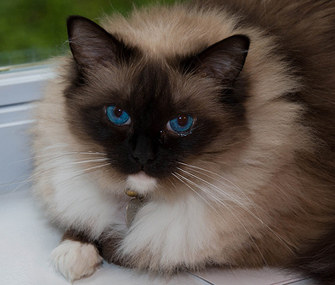 Photo by Maron Man
Zoe, a cat who saved her family from a fire.

People have long believed that there's more to cats than meets the eye. It didn't go out of style with the Egyptians who worshipped them or the medieval Europeans who associated them with witches, and it's still a popular opinion: In a 2010 poll, 41 percent of cat owners said their cats had a sixth sense about imminent bad news.

Maron Man might agree: He credits his cat Zoe with saving his family from a house fire.

"We moved into a new house back in May, and it was a nightmare from day one," he recalls. "It flooded the first day because they didn't seal the basement properly. Then about three or four weeks after that, they came to do some repairs because our AC upstairs in the attic wasn't blowing any cold air."

The technician left, saying the AC was fixed — and then that night the basement flooded again. As Man showered after cleaning up the mess, the whole time, his cat Zoe was crying at him.

"It was a loud sound, like a human being crying, and she kept on looking at me," he says. When he got out of the shower, she crawled up on his legs to get his attention. "I said, 'What's the matter, Zoe?' Then she jumped off, walked a couple paces ahead of me, and turned and looked at me."

Man followed the cat into the room where the entrance to the attic was located. He didn't see anything wrong, but she kept vocalizing. Then he felt heat from the ceiling and popped open the attic door.

"It felt like a microwave in there," he said. "That's when we grabbed the cat and called 911. The fire department said there was an electrical issue that caused a fire up there. If Zoe hadn't communicated that to us, we could have all been fried that night."

That's the sort of story that makes people say cats have a sixth sense. But John Bradshaw, author of the book Cat Sense, suggests we consider what the cat's first five senses are capable of.

"There are plenty of ways that lots of animals, including cats, can pick up on stuff that we can't sense," says Bradshaw. For example, cats can hear ultrasound, which is useful to them for finding prey.

"They can eavesdrop on the little high-pitched squeaks that mice are making to each other," says Bradshaw. "Most of the sound that mice produce is more like that of a bat. What we hear of a mouse's squeak is actually only about 10 percent of their noise. Most of it is beyond our hearing range, but cats' ears work in that range."

Since the fire was caused by an electrical fault, there may have been noises that cat could hear, because electricity emits sound in that high-pitched ultrasonic range.

And although we think of dogs as the animals with a great sense of smell, cats are still much better at it than we are.

"Their sense of smell is not as good as dogs — it's average for mammals, but that's still way better than us," he says. "Cats are probably only about ten percent as sensitive as dogs, but that still means they're a hundred times better than we are. A very small fire, which would produce almost no smell and be almost indetectable to us, might very well be detectable as far as a cat is concerned."