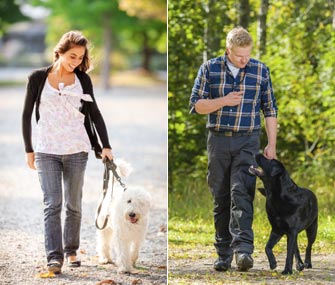 Many dogs express a clear preference about which people they like — and which they don’t. While there are no hard and fast rules about who a dog might like best, it’s easy to generalize: Dogs prefer adults over children, particularly women. Dogs also generally prefer people with soft voices and calm mannerisms over those who are loud and boisterous.

While these sweeping assumptions are not valid for every dog all of the time, many of them do have some truth to them, for some very simple reasons.

A dog's preference for one person — or type of person — over another has a great deal to do with socialization. Dogs don't, as a rule, dislike men, but most dogs are cared for by women, and are thus more comfortable around them. A single woman is more likely to have a dog than a single man; in a couple, the woman is more likely to handle the dog’s care. In addition, most animal care workers and veterinarians are female. Some dogs may also be intimidated by a man’s physical appearance, as men are often taller and more sturdily built, with deeper voices and strange features, like facial hair and hats.

Dogs who lack contact with children during their prime socialization period are prone to prefer adults, for some very specific reasons. The way children act — moving with erratic and fast movements, invading the dog’s space — can be threatening to a dog, particularly one who has little experience with children.

Children may behave in ways that are scary to a dog, such as running up and hugging or kissing him, pushing or climbing on him, or putting things in his face. Children often fail to understand how to approach a dog safely and will reach out to pet him when he’s eating or sleeping, or pull a toy out of his mouth. Small children can be prone to accidentally dropping a dog they’re holding, which can be terrifying for the pet.

A person with a loud, booming voice is more likely to startle a dog than one who is soft spoken. A quieter voice with a light, joyous inflection is soothing to most dogs. When pet parents alternate between a stern voice with a hint of anger and a friendly and inviting voice when asking for a behavior, the dog almost always responds with greater eagerness to the happier voice.

People with peaceful body language who allow a dog to approach on his own typically get a warm welcome from the dog as well. A person who has turned her body just slightly to the side is more inviting for a canine to approach than someone facing him head on.

Kneeling slightly rather than bending over the top of the dog is also more approachable. Looking away every so often from the dog or avoiding eye contact with shy dogs also poses less of a threat than direct eye contact and helps the dog stay calm.