Home ›
Our Pet Experts ›
“Do Dogs Mean to Be Mean?” A Look at Preventing Dog Bites

“Do Dogs Mean to Be Mean?” A Look at Preventing Dog Bites

By The American College of Veterinary Behaviorists | May 21, 2014 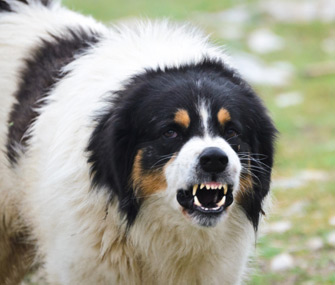 Dogs can be our best friends, our companions and our confidants. But when things go wrong in human-canine interaction, a bite is sometimes the result.

Nearly 4.5 million Americans are bitten by dogs each year, according to the Centers for Disease Control, and half of those bitten are children. One in five dog bites — or about 885,000 — requires medical attention.

National Dog Bite Prevention Week,which takes place May 18-24, seeks to change those statistics. For an informed view on preventing dog bites, we turned to the book Decoding Your Dog: The Ultimate Experts Explain Common Dog Behaviors and Reveal How to Prevent or Change Unwanted Onesby the American College of Veterinary Behaviorists.

As the book explains, stopping a dog from biting starts with understanding the dog. The following is excerpted from the chapter “Do Dogs Mean to Be Mean?”

All dogs, however calm or tolerant they may seem, have the potential to bite. That does not make them "mean." Meanness really does not apply to our canine companions. There is no revenge or malice in dogs; they are merely using canine tools to respond to social situations.

Aggression can occur in response to many different triggers, such as the desire to keep possession of a favorite toy, a response to the approach of an "intruder" in the yard or house, or to a too-vigorous brushing of a matted coat. But these triggers are not always obvious. Maybe you just didn't see that unchewed rawhide chip three feet away from the dog under the sofa, or you thought your dog was tolerating the combing because she was standing still for it.

To those who don't know dogs, and sometimes even to those who do, aggression can indeed appear to be impulsive and unprovoked. However, in the majority of cases, once you understand what sets off an aggressive dog, her behavior becomes foreseeable and avoidable. The truth is that most aggressive behavior is provoked — at least from the dog's perspective — and predictable but may not occur every time a dog encounters a specific trigger. It is this lack of effective communication between us and our companion dogs that sometimes makes their behavior seem unpredictable.

Resource guarding is especially difficult for humans to understand. Traditionally, dogs are likely to value and guard food or food-related items, such as rawhide chews or food bowls. But it is important to view "value" from each individual dog's perspective. Dogs might guard a resting spot or bed, the bathroom trash, even their valuable food-giving owners.

Noticing the provocation, however, can be difficult. It can be challenging to pick up on all the subtle behavioral signals of some aggressive dogs. As discussed earlier, some dog breeds, and individuals within any breed, are rather stoic, or their signaling apparatus (or body language) has been tampered with by breeding, disease, or plastic surgery.