You've found a dog trainer you like and you're excited to be working with her — but then she recommends clicker training or variable reinforcement or redirection and you have no idea what she's talking about. Trainer Mikkel Becker can help: She's defined some of the most commonly used dog training terms, so you can communicate successfully with your trainer and help teach your dog to be a well mannered pooch. 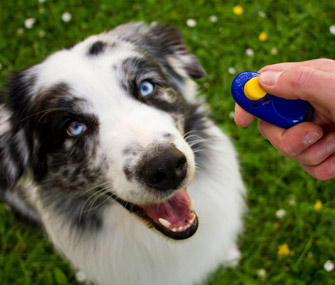 Alamy
Clicker training is a form of positive reinforcement training that uses a signal, most commonly a clicker, to pinpoint correct behavior.

Appeasement gestures: Behaviors a dog uses to ask for space or to present himself as nonthreatening. Appeasement gestures may include scratching, yawning, licking lips, play bows, turning head or body away, sniffing the ground, lifting up a paw, slowing down movement, freezing or a submissive grin. These signals are a normal part of dog interaction, but in some situations, they may be signs of stress.

Barrier frustration: Behavior, particularly barking and lunging, that occurs when a dog is prevented by a barrier from reaching a stimulus. The barrier can be a fence or leash or anything else that blocks the dog from accessing whatever it is that is exciting or arousing him (another dog, for example).

Bite inhibition: A dog’s ability to control the amount of pressure when mouthing an object. Lack of bite inhibition may be an indicator of aggression. Indications of a dog who does not have good control over his bite may include pressure that causes bruising, bleeding or deep punctures; multiple bites in an incident; grabbing and shaking an object; or biting down and refusing to let go.

Capture: Marking and rewarding a naturally occurring behavior, such as sitting or lying down, as the dog is doing it. Once a behavior is captured, marked and rewarded, the dog learns to associate the behavior with the reward. This is the first step in teaching a dog to do a behavior on cue.

Clicker training: A form of positive reinforcement training that uses a signal, most commonly a clicker, to pinpoint correct behavior. The signal is immediately followed by a desirable reward, such as a treat, a toy or an opportunity to play. The signal helps the dog identify which behavior is earning him the reward.

Click: The action of using a marker (most often a clicker) to pinpoint a desired behavior. May also be used to describe the sound the clicker makes.

Competing motivation: A stimulus or situation that causes conflict between what the dog desires and what the human desires from the dog. An example of this is a dog who is trained to reliably come when called not returning to his person at the dog park, because he is distracted by people and other dogs.

Compound stressors: Events that increase a dog’s stress level and cause him to be more on edge and prone to be reactive or upset.

Conflicted: When a dog simultaneously wants to do something and is afraid to do it. For example, a dog can be conflicted when approaching someone new: He wants to approach to smell and investigate but is afraid of the person reaching his or her hands out or bending over to pet him.

Correction: An action that stops or punishes a dog from doing an unwanted behavior. For example, a jerk on the leash. Corrections are a form of punishment and as such are not recommended as a training strategy. A number of problems, including increased anxiety, can be associated with the use of correction as a training technique.

Counter conditioning: The process of changing a dog’s emotional reaction to a situation from negative to positive. This is done by gradually exposing the dog to the situation in a way that does not upset him while pairing the situation with a desirable reward. The goal is to create a positive association with the situation. An example of this type of scenario is encountering anotherdog on a walk. Through counter conditioning, the dog can be taught that the approach of another dog is the signal for a treat, rather than the signal for uncontrolled barking and lunging.

Criteria: The standard by which a pet owner judges a behavior or the standard used to decide which behavior is acceptable and which is unacceptable. Criteria can be adjusted as needed during training in order to enable the dog to successfully learn the correct behavior.

Cue: Signal given to a dog to elicit a desired behavior. “Cue” and “command” are traditionally synonymous, but the word “command” is not commonly used in reward-based training, as it has a connotation of using force to make a dog do something. “Cue” is most often used to refer to a training situation where a dog is asked to perform a behavior and is rewarded for his success.