Scavenger hunt, treasure hunt: Hiding treats, food or toys inside or outside for the dog to find. A scavenger hunt may be used as an alternative to a food puzzle. For example, kibble can be scattered on the grass rather than served in a bowl.

Sensitize: To become more sensitive, alert, fearful or reactive to a specific situation through repeated exposures. For example, a noise may initially cause a dog to startle, but after hearing the noise repeatedly, he may progress to shaking and stress panting when he hears it. (See also: habituate.)

Setting events: Conditions in a dog’s life that make it more likely that the dog will act in a certain manner. For example, a dog who doesn’t get enough exercise may be more wound up and hyper around guests.

Shaping: The process of teaching a dog a complex behavior by breaking it down into simple steps. The simple behaviors are trained in a gradual progression, with each new step moving the dog closer to the goal behavior. (See also: successive approximation.)

Socialization: The process by which a puppy learns about the world. The prime socialization period of a puppy is from about 8 to 12 weeks of age but can extend from about 3 to 16 weeks of age. A puppy’s experiences during this time can influence his perception and reaction to the variety of people and situations he will encounter as he grows.

Stimulus control: When a cue elicits a predictable and reliable response from a dog. For example, when a dog is asked to sit, he does so every time under a variety of different conditions.

Stress: When discussing dogs, stress is frequently used as a synonym for distress. Dogs can experience stress for a number of reasons, from lack of enough exercise or mental stimulation to unpredictable and punishment-based interactions with humans. Stress can be related to environmental and life situations as well, such as moving, losing a family member or the arrival of a new pet. If a dog is exhibiting signs of stress, it is important to address them as early as possible.

Stress signals: Behavior and body language indicative of escalating tension and anxiety, such as barking and whining or pacing and panting. Stress signals may begin with mild avoidance and progress to more extreme anxiety and panic.

Submission: Strategy for interacting with a person or another dog to create harmony and goodwill. Signs of submission can be subtle (a dog holding his ears slightly back in greeting) or overt (a dog rolling on his back in front of another dog). (See also: appeasement gestures.) 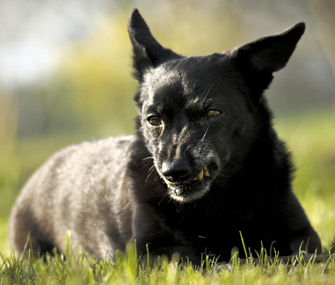 Thinkstock
Warning signals from dogs can include freezing, growling, barking or snapping.

Systematic desensitization: Training plan designed to change a dog’s response to an upsetting scenario by breaking it into small pieces that do not trigger a fear response in the dog. The goal is to teach the dog to tolerate the situation without getting upset or anxious.

Target: Teaching a dog to touch a certain part of himself to an object or area. For example, touching his nose to a person’s hand. Targeting can be used to get a dog to move willingly from one place to another. It can be used to teach a new behavior, such as a spin. Targeting can also help dogs to overcome fear of certain objects; a dog can be taught to target a pair of nail clippers as a way of reducing stress at the groomer’s.

Variable schedule of reinforcement: A variance in the amount of time or number of behaviors required for a dog to a reward. A variable schedule keeps the dog excited about and invested in the training.

Warning signals: Behaviors used by a dog to communicate discomfort with a situation. These can include freezing, growling, barking or snapping. These signals are used to warn a person or another dog to slow down and back off. It is important not to punish warning signals, because they are indicators of the dog’s discomfort; instead, the situation needs to be addressed in order to prevent a bite or a fight.