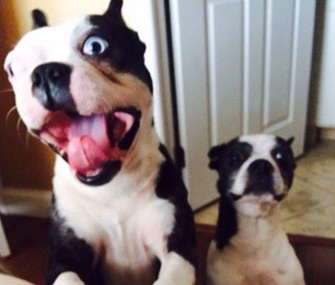 Bo and Zoe the Boston Terriers promise to bark more in 2015.

Humans aren’t the only ones who are trying to better themselves this year. Dogs have resolutions, too — and we asked our canine friends what their goals are for the year ahead.

I don't know how it happened, but I was really slack in 2014 on warning my family about the mail carrier, UPS guy, neighborhood cats, leaves blowing in the wind and scary shadows on the walls. I promise to be ever vigilant in 2015.

2. I am determined to eat faster.

My goal this year is to break the five-second record for eating dinner. I got really close in 2014, and with a bit of training, I know I can eat my kibble a fraction of a second faster.

Maybe it's been too many years since I was living in a pack, or I've just been on my own too much, but I know I need to do better. This year I will always ask before I rush to sniff another dog’s butt.

4. I will play fetch the way it's meant to be played.

I really need to stop retrieving tennis balls and then returning them to my human. I’m making the game all about me when she would probably have more fun chasing the ball. 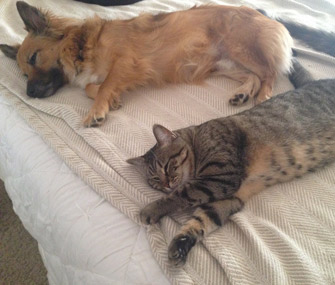 Dexter the Corgi-Shepherd mix can't believe he spent so much time napping with Siberia the cat in 2014.


What can I say? I've let my guard down. I know the cat is my rival, yet I just let her walk all over me. Several times in 2014 I awoke to discover I was literally sleeping with the enemy. That ends now. Today the cat is going to learn there's a new sheriff in town.

Sure, I run around, I bark, and when possible, I get sufficiently muddy at the park. But that's not enough. I’ve really been lazy and haven’t humped another dog in forever. I worry the other dogs think I don't care anymore!

7. And, finally, I will catch a squirrel.

This is going to be the year. I am sure of it.

What would your dog's New Year's resolution be? Let us know in the comments below.