Home ›
Our Pet Experts ›
Lisa Granshaw ›
Everything Rosie: How a Pup Rescued From a Backyard Breeder Is Inspiring Change

Everything Rosie: How a Pup Rescued From a Backyard Breeder Is Inspiring Change 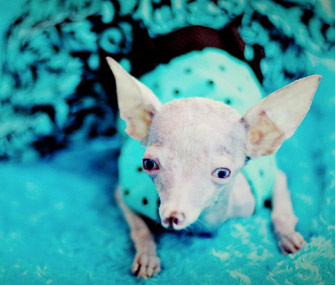 Imagine spending the first two years of your life in a house with 40 other dogs, hiding under a piece of furniture to avoid being trampled and never going outside to play in the sun. These horrible conditions are how Rosie, a 2-year-old Chihuahua, lived until being rescued from a backyard breeder in June 2012. “She looked like a rat or an anteater. It was hard to figure out. So when you see that at first, it’s hard to comprehend that that’s a dog,” says Cinnamon Muhlbauer, Rosie’s rescuer. “I knew I had to get her and see what could be done.”

The breeder and animal hoarder Rosie lived with was brought to Muhlbauer’s attention by a friend who noticed a sign in her neighbor’s front yard advertising free puppies. When the friend went into the neighbor's house, she discovered Chihuahuas who had been inbreeding for years, resulting in a number of puppies with deformities like Rosie's. When Muhlbauer arrived, she took Rosie and two other pups and went straight to a vet.

Rosie arrived at the Malibu Vet Clinic with a bad skin condition in addition to her congenital deformities. Luckily, tests showed her heart and internal organs were fine.

“For the most part she’ll have a happy, normal life,” says Dr. John Lupo. Dr. Lupo believes that this is largely due to Muhlbauer’s love, but Muhlbauer insists Rosie has helped her more.

“She’s changed my life. I don’t think I had any idea how she was going to wind up changing my life,” says Muhlbauer.

It all started when Muhlbauer announced she was taking Rosie in and posted a picture on her personal Facebook page with a request for help. Overnight she received a huge response from friends and was able to cover the initial $9,000 in medical expenses.

Muhlbauer then created a website and Facebook page for Rosie. People from around the world have made donations to help with Rosie’s care. People who don’t donate directly find other ways to help.

“I’ve literally gotten checks in the mail from strangers across the country that say, ‘For Rosie.’ It’s touched the whole team,” says Dr. Lupo.