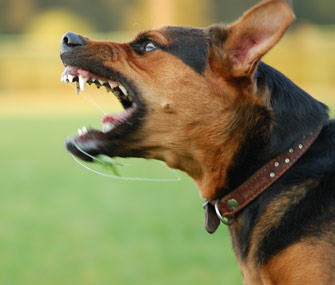 Thinkstock
One common behavior myth is that aggressive dogs are trying to dominate their owners.

Veterinarians are a lot like pediatricians. Not only do our patients struggle, scream, cry, and otherwise communicate in ways that often leave much to be desired, but like "baby doctors," we also have parents to contend with. And parents come with their own set of challenges. Perhaps nowhere is the fact of parental influence more stressful than when it comes to talking about their pets’ behavior. The preponderance of animal behavior misinformation delivered by everyone from Dr. Google and Dr. Breeder to Dr. Mother-in-Law to Dr. TV Pet Personality means that simple misconceptions can easily turn into culturally intractable myths.

Sadly, veterinarians are too often relegated to the final stop on the fix-this-problem bus tour of any given pet’s by-now-too-serious-to-live-with behavior disorder. Which is probably why pet behavior myths drive us crazy. After all, we know too well what happens when behavior problems get out of control: Problem pets are unwanted pets. And unwanted pets end up in shelters.

Which is why veterinarians are always busy trying to debunk myths like these five zingers:

Myth 1: Aggressive pets are trying to dominate us. This is not always true. Indeed, it’s usually not. Aggression is much more likely the result of fear or anxiety than the desire to dominate anyone. Nonetheless, people seem to prefer to believe that aggressive or difficult pets are attempting to control their environments than reacting to its stresses. The observation of wolf hierarchies —which has been shown to be an inapt model — largely informs this canine worldview.

Sadly, this misconception about dogs — widely disseminated by certain popular media personalities — has led to the more widespread use of punitive training techniques that can lead to even more serious behavior problems than they purport to address.

Myth 2: Abuse is the root cause of fear and aggression in pets. If we had a dime for every time we were informed of our patients’ past history of abuse, every veterinarian I know would have a stack a mile high. Sure, it’s possible. But if every owner who believed their pet was formerly physically abused was spot-on in their suspicions, we’d have to assume pet abuse is far more prevalent than we currently believe it to be.