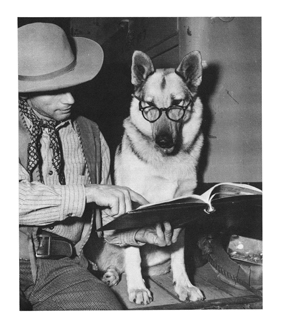 Books about dogs are no strangers to the best-seller lists, but “serious” literary folks tend to sniff at them in disgust. When they do get noticed for more than their popularity, it's usually for the skill of the writer or the bigger truths about the human condition revealed through the story of our closest animal companions.

Or both, in the case of Susan Orlean’s Rin Tin Tin: The Life and the Legend (Simon and Schuster). Such is the skill of Orlean, staff writer for The New Yorker and author of the best-selling The Orchid Thief (which became the movie Adaptation), that many interviewers and reviewers feel duty-bound to say, in one way or another, “But, of course, the book’s really not about the dog.”

Except, that the book really is about the dog. And in this Oscar season where so much attention is being focused on the charms of the four-legged stars, the story of the original canine celebrity is all the more compelling.

Rin Tin Tin is about a dog who, according to Orlean, changed what we want from dogs not once but twice. Rin Tin Tin made the German Shepherd the most recognizable and sought-after dog in the world, while also setting it on the road to ruin as the crippled mess of a breed many view it as today. (The military and police work of the German Shepherd is today mostly handled by the Belgian Malinois, a breed that is very close to what the German Shepherd once was.) 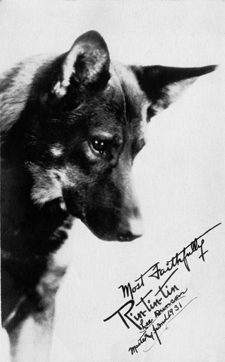 Reached by phone in Southern California, Orlean talked about the dog (actually dogs, plural) who took over her life for more than seven years, about a pup born on a World War I battlefield and saved by a man scarred not as much by war as by abandonment as a child. That man, Lee Duncan, re-created the life he wished he’d had time and time again through the stories of a heroic, ever-loyal canine companion. Rin Tin Tin was exactly that for the man who owned him.

“I think that animals are a significant part of who we are as living beings,” Orlean says. “It’s no surprise that our relationship with them would track our culture. And in the case of Rin Tin Tin, a lot of what he represented was real. The quality he represented as a film icon was authentic.”

The country he changed was ready for him too. As the postwar population shifted from farms to towns and cities, the farm dog who relied as much on natural instincts as training was replaced with a dog who needed to know things no dogs in history ever had. As astonishing as it may seem today, with more celebrity trainers and dog experts than farmers, most people didn’t realize dogs could be trained when the striking Rin Tin Tin became the country’s top box-office draw.

“People were so amazed by his performances,” she says. “The idea that a dog could respond to that kind of bidding was so exciting, so dramatic. It’s not that no one had ever seen a dog respond to his name, but Rin Tin Tin made people think, Wow, that would be cool to have a dog like that.”

“Lee appeared in public with him, and that was part of the phenomenon," Orlean says. "So many people just couldn’t believe it was real, and Lee got letter after letter from people asking for help, writing, ‘I’m trying to get my dog to roll over.’"

Rinty’s film stardom lasted barely longer than his own life, and his owner retreated to the hot, dusty lands west of Hollywood with the dog’s heirs, never giving up on his faith in the stories he could tell through the dogs he loved. But years would pass before another technological revolution — television — would be new enough to give an old man and his dogs another chance.

“The earlier films were not targeted to children,” Orlean says. “But by the 1950s, the baby boom had arrived, and for the first time parents were willing to indulge the desires of their children.”

So Rin Tin Tin was reborn, as a brand (other dogs played the role of Rinty), four legs to hang a story on, and a merchandising machine the world had never seen the likes of before. Lunch box, calvary cap, action figures — if Rin Tin Tin was tied to it, it sold and sold.

But the role had changed for the dogs playing Rinty. “Rin Tin Tin was the sidekick,” Orlean says. “It was so different from the films of the 1920s.”

From action hero to sidekick to … Lassie. The pretty, nurturing character of a female Collie who was never more than fiction grew in popularity to eclipse the stalwart Shepherd, reflecting another change in what modern America expected of its dogs: a best friend and confidant.

Still, Orlean makes the case that had Lee Duncan not died, Rin Tin Tin may well have made the shift to the third wave of change, to what the writer Jon Katz has termed The New Work of Dogs in his book of the same name (Random House) — the dog as therapist, servant and life coach.

“One of the scripts I found that was in development had Rin Tin Tin as a service dog,” Orlean says.

Instead, those roles, in real life and in fiction, have gone to other dogs, from Lassie onward. The day of the heroic dog was finally over, and all that was left was for someone as gifted as Susan Orlean to make sure Rin Tin Tin — the dog, the brand, and what he meant to a growing, changing America — would never be forgotten.