From Puppy Mill to Pet Store, a Veterinarian Follows a Young Dog's Journey 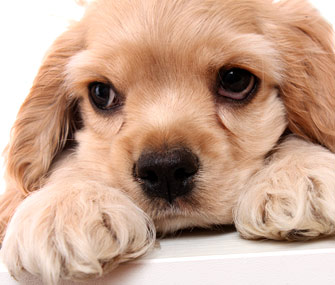 Joe and Cindy first laid eyes on Chloe when they passed through a pet store on their way to a movie. They never saw the weekend blockbuster but instead fell in love with a little blond Cocker Spaniel puppy with big brown eyes and bought her on the spot.

Chloe was adorable and quickly became part of the family, but Joe and Cindy noticed right from the start that Chloe drank lots of water and had many accidents in the house. A few months later, when she began vomiting and refusing her food, they brought her in to me and I diagnosed kidney failure caused by a birth defect. By the time she was 11 months of age, the once-playful puppy became profoundly weak and lethargic and, unfortunately, I had no reasonable way of creating long-term improvement for Chloe. Joe and Cindy held their little girl as I ended her life.

The Tragedy of the Puppy Mill

This couple didn’t have to have their hearts broken this way. Though any pet can have unexpected medical issues, Chloe’s life likely began at a puppy mill, a veritable factory (disguised as a kennel) in which huge numbers of puppies are produced for profit. Puppy millers have no significant interest in the health histories of their breeding stock, so it’s no surprise that birth defects run rampant. Their sole objective is the mass production of purebred pups and the “designer hybrids” that are all the rage these days. Pups not used to fill pet store inventory are offered to the highest bidder at auction or sold online via websites that dupe naïve buyers into believing they are doing business with reputable breeders. Manufacturing puppies is big business.

Chloe’s story is not unusual, as completely healthy puppy mill dogs are the exception rather than the rule. Not all medical issues are life-threatening, but many require life-long management. Perhaps most common are behavioral issues significant enough that affected dogs are commonly relinquished to shelters or rescue organizations. Sometimes, the behavioral issues result in euthanasia.

Just like other forms of manufacturing, there is a system to the way dogs are typically bred and treated in puppy mills. It is likely that Chloe entered the world in a wire mesh cage or crate, no more than a few inches longer and taller than an adult Cocker Spaniel. Although mama was a purebred, her matted overgrown coat made her lineage undetectable. The “maternity ward” was overheated and poorly ventilated, with multiple cages stacked one on top of the other. Some of Chloe’s siblings didn’t “make it,” although it’s a wonder that any survived given their mother’s confinement within such a small, filthy environment, her compromised health (inadequate nutrition, parasites, dental and ear infections), and lack of downtime from pregnancy and caring for babies.

Chloe’s first few weeks of life were probably spent exclusively inside a cage and without any significant human contact. (The critical time during which pups learn about and develop their patterns for social interactions with other dogs and humans is between 3 and 12 weeks of age, so Chloe was already operating at a disadvantage.) She was well cared for by her mother (puppy mill breeders that are not good mothers are quickly culled from the pack). There was plenty of milk to be had; mama dogs are adept at sacrificing their own reserves before diminishing milk production.

At 5 weeks old, Chloe and her siblings were whisked from their mother and loaded into a van packed with crates crowded with other youngsters. (This is far too early to be separated. For purposes of socialization, pups should remain with their littermates for a minimum of eight weeks). Their destination was a puppy warehouse where brokers doled out their inventory to fill pet store orders. Chloe was one of many pups shipped from the Midwest to California. It was quite a journey for such babies, and not all the pups were alive or in the best shape upon arrival. But this was no surprise to those who unloaded the delivery. As with any perishable goods, there’s bound to be some damage during transit.

From Puppy Store to New Home

By 8 weeks old, Chloe was living in a pet store. Until this point, she’d never set foot out of her cage, but then, suddenly, she was being picked up and examined by many different human hands (some gentle, others not so gentle). When Chloe was 11 weeks old, Cindy and Joe happened by. They’d never before cared for a dog, but their emotions managed to override their sensibilities. They were reassured and encouraged by the pet store manager who “sealed the deal” by guaranteeing Chloe’s health. She could be returned and exchanged for another pup should she prove to be unhealthy.

Shortly after her adoption, Chloe was diagnosed with fleas, an ear infection and intestinal parasites. She had never voided anywhere but in her own cage, so, as with many puppy mill dogs, house training never made sense to her. In puppy class, Chloe appeared to be a social misfit. She was fearful of the instructor, and while the other pups played and wrestled, nervous Chloe steered clear of the activity. And then her health issues started, and, well, you already know the rest of Chloe’s sad story.

What can we do to stop this insanity? The best way to protect both pets and their future families is to actively campaign for the extinction of puppy mills. Write to legislators, sign petitions, join or initiate a peaceful protest at a dog auction. Make your voice heard against puppy mills.

More importantly, you can educate anyone and everyone you know (including your children) that the best way to adopt a pup is via a shelter or rescue organization, or purchase from a responsible breeder. Emphasize the importance of never, ever purchasing a puppy from a pet store or online, sight (and site) unseen. One less purchase from a puppy mill is one step closer to their eradication.

Dr. Nancy Kay graduated from Cornell College of Veterinary Medicine and is the author of Speaking for Spot: Be the Advocate Your Dog Needs to Live a Happy, Healthy, Longer Life. Dr. Kay is a specialist in small animal internal medicine at Upstate Veterinary Specialists with offices in Asheville, N.C., and Greenville, S.C. She is also the author ofYour Dog's Best Health: a Dozen Reasonable Things to Expect From Your Vet.