Giant George: A New Book About Life With the World’s Largest Dog 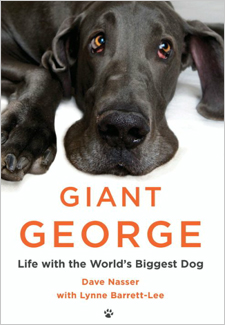 Most of us know well the trials and tribulations of Clifford the Big Red Dog, who got into all sorts of goofy trouble because of his rather unusual size. Of course, Clifford is fictional, but Dave Nasser has experienced the real-life equivalent: His Great Dane, George, is the Guinness World Records' Tallest Living Dog and the World’s Tallest Dog Ever Recorded.

Anxious to share his story, the proud owner of this large dog recently published a memoir, Giant George: Life With the World’s Biggest Dog, about his oversize pup adventures. Nasser also gave Vetstreet some added inside scoop on life with a large dog breed.

Q. What motivated you to write this book?

A. Nasser: "Giant George's story and message is 'It is OK to be different.' Believe it or not, George waspicked on as a puppy, [who] was too big to be in the 'puppy' area of the dog park. As he grew, he was continually made fun of by humans, thrown out of hotels and unfairly stereotyped as dangerous. We want to send the message, especially to children, that you may feel different or look different, but everyone has the potential to be the biggest or the best at what they choose to do."

Q. When did you first realize that George could be the tallest dog on record?

A. "It was a name that I felt I could call out at the local dog park and not feel embarrassed."

Q. Is it expensive to feed him? 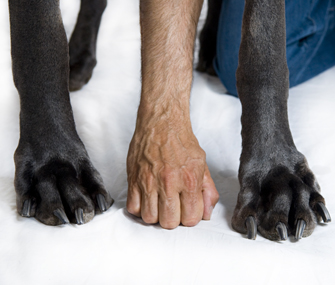 Those are indeed Giant George's paws.

A. "It sure is — he eats between 110 and 130 pounds of food per month, which is mostly roasted chicken mixed with dry dog food."

Q. Does Giant George have any peculiar habits?

A. "He is a water snob and will only drink water if it is from a bottle. Weird, huh?"

A. "George is a huge cuddle monster. He loves human contact. I have two small children, and he allows them to lay on him, pull his tail and his ears — and he pulls them around the house as they hold onto his tail. He totally understands how big he is."