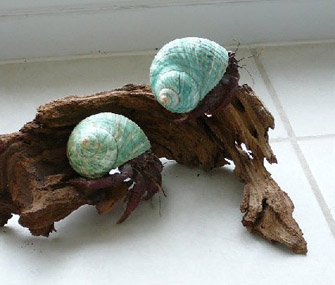 Photo by Carol Ormes
Carol Ormes' two hermit crabs. One has been with her for 37 years.

For many people, it's a summer tradition to buy their kids a hermit crab at one of those beach stores. Sadly, it's also a summer tradition for most of them to die after a couple of weeks. If you think this is because these creatures naturally have a short lifespan, think again — and meet Carol Ann Ormes. She has had her crab, Jonathan, for 37 years, and it all started with a trip to the beach in Delaware.

"One of my friends had read about hermit crabs, and I'd never heard of them," she says. "She kept telling me how they change seashells, and I thought, 'That's really interesting.'"

Ormes had second thoughts when her friend bought one, though: "I took a look at him, and I thought, 'Uh, I don't think so.' He was a pretty ugly little guy." But by the end of her vacation, she decided to buy Jonathan Livingston Crab on her way home.

Since this was long before the Internet, Ormes had no source for care advice, but her instincts told her that the wire cage he came in wasn't suitable. She went to a pet store to buy a glass tank, and "there was Crab Kate sitting there, looking at me and waiting to go home with me," she says.

Sadly, Kate died in 2011, but Jonathan is still running around Ormes' apartment in a retirement community in Florida 37 years later.

Caring for a Crab

So why do most people have such a different experience with a hermit crab? Experienced crab owners offer the following care tips. To start, hermit crabs need to be kept at around 80 degrees with 80 percent humidity, which is impossible in the wire cages they're often sold in. You'll need at least a 10-gallon aquarium with heaters, a thermometer and humidity meter. The tanks should have sand or a similar substrate that's deep enough for the crabs to completely bury themselves in order to molt. If they can't molt properly, they'll die.

You should expect to spend around $100 on a setup, Katherine Trammel says: "That's the minimum it's going to take to provide a good home for these animals."

Trammel should know. She has 22 crabs, after getting her first just last November. She wasn't put off by their care requirements — in fact, far from it. "The salesperson told me, 'Oh, you can feed them whatever, throw them a piece of fruit every couple of days,' and then I got home and started researching," she says. "These guys need a lot of care, and the more I learned about them the more I said, 'This is incredibly fascinating.'"

Trammel became particularly interested in researching their diet, and she now has an online shop called Kat's Krabby Supplies that sells organic hermit crab food. As scavengers, they need a varied diet containing protein, fruit and vegetables, nuts, calcium and tannins. The pellets you can buy aren't really suitable, Trammel says, and, perhaps fortunately, most crabs won't eat them anyway.

"I've never met a hermit crab that would eat pellets," Ormes says. Jonathan likes worm castings from the Hermit Crab Patch and a mixed fruit treat, but he alwaysleaves behind the coconut. He has also always loved oak leaves. Now that Ormes has moved from Maryland to Florida, she has friends mail them to her.