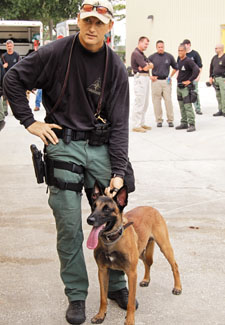 “So I take Boomer and — again, I’m a new handler — I’m trying to take him to the wood line so we can check to see if Boomer can pick up a track into the woods. Boomer keeps pulling me over towards these junk cars and I’m like, ‘Come on buddy. We’ve got to check for a track.’ And he keeps pulling me. Well, then I start to think back to the house, and I think, you know, trust your dog. So I unhook him and let him go,” Perryman says.

Boomer shot straight for the rusty junk cars with the flat tires and began circling a full-size van. The tires were blown, and grass had grown up around it.

“I didn’t see a thing under there,” Perryman says. “Again I thought, ‘OK, I’ll play along,’ so I call Boomer back and I say, ‘You under that van, come out.’ And I see this guy lower himself. He had pulled himself into the lower frame of the van. So if you look under it you can’t see him. So he lowers himself and comes out and he was the guy who fled the scene, dark sweatshirt. After this operation, people in Washington became true believers in these talented dogs.”

Nash, a Belgian Malinois, was part of the family from the moment he was presented as a potential ATF SRT canine partner for Special Agent Jeff Kunz. “My wife and son actually picked him out,” Kunz says. “The vendor, Ivan Balabanov, brought two dogs out, Nosco and Nash. I actually liked Nosco, but my wife and son were with Nash, looking at him. And Nash would bring a toy right to my son.”

Kunz was impressed, and he took Nash home. While Kunz underwent a knee surgery, Nash bonded with Kunz’ wife. “From that time on, he was basically part of my family. You know, a working dog but he’s also a family pet,” Kunz says.

Kunz and Nash bonded as partners, too. They had deployed on over 200 high-risk operations together. On Dec. 11, 2012, Kunz and Nash were on assignment in the process of arresting a very violent home invasion robbery crew. Kunz and Nash were part of the arrest team in a hidden location.

“So the plan was, if the suspects did run, Nash would stop and apprehend them,” Kunz says.

On the signal, Kunz and Nash came out, proceeded to their hard right, and saw four suspects running. But two were running right up the middle aisle.

When Nash saw the fleeing suspects, he began pulling. Kunz called for the suspects to stop, but they didn’t stop. So Kunz released Nash. Then the unthinkable happened. One of the suspects took a hard left and pulled out a gun and began shooting at a group of SRT agents who were blocking his path.

When the suspect saw Nash coming at him, he stopped shooting at the agents and targeted his gun and his gunfire towards Nash. “And then he shot Nash and then he shot a couple rounds toward us,” Kunz says. “At that time, myself and two other guys shot at him, and the suspect dove to the ground and surrendered. But Nash obviously diverted his attention. One of our medics was in the line of fire driving the blocking vehicle. He was getting shot at and he said the rounds were coming closer and closer to him until Nash got the guy’s attention.”

Nash’s actions likely saved lives that day — and his heroics cost him his own.