Home ›
Our Pet Experts ›
Mikkel Becker ›
How Can I Get My Dog to Come When Called?

How Can I Get My Dog to Come When Called? 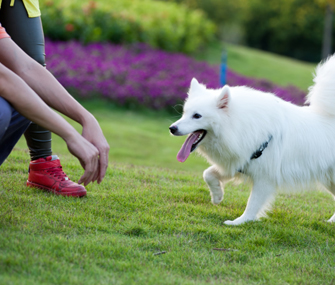 Q. My dog does OK on the come when called command, but he’s slow to return to me and takes his time. How can I speed up his response?

A. Your dilemma is not an uncommon one. For many dogs, coming when called is not nearly as exciting as running off leash. Part of the reason for your dog’s slow pace may simply be that he has never been taught to return more quickly, or it may be that returning to your side doesn't offer a big enough reward. Either way, there are methods to speed up his response when you call him.

It’s important to make coming when called a positive experience for your dog. It can be easy to inadvertently punish your dog for obeying the command by doing something the dog doesn’t enjoy, such as putting him on leash when he returns to your side. Instead of using the come when called command to end your dog's fun, make it part of playtime: A good rule of thumb is that for every five times you call your dog to your side, only one of those times should end in something your dog might not find enjoyable, like leaving the dog park or going inside the house. The rest of the time, reward your dog for coming and then release him to play again.

One of the best ways to increase your dog’s return speed is to reward only the faster recalls. Praise his slower returns and let him go play again, but only offer treats or toys on the quick responses. Take your dog’s speed into account; if he always walks back to you, rather than running, don't expect him to suddenly start sprinting back to you. Instead, reward the returns where he does the least amount of sniffing or where he turns and heads toward you right away. As your dog's response time gets faster, you can adjust your expectations and rewards accordingly.