How Cats Drink — A Scientist Explains How It Works 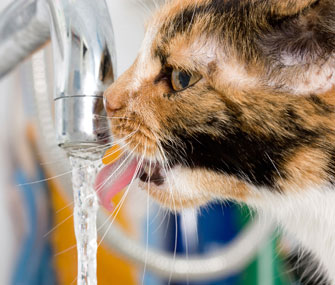 You’ve seen your pet at the water bowl, but did you ever wonder how the water actually reaches its mouth? Roman Stocker, an associate professor of civil and environmental engineering at the Massachusetts Institute of Technology (MIT), and research coauthor Pedro Reis used a high-speed video camera to reveal how cats quench their thirst.

A Look at Laps

When a dog drinks — or laps — he uses his tongue like a big spoon to scoop up water. Cats have their own style. Stocker’s research shows a cat’s tongue skims the water’s surface.

When a cat’s tongue touches the top of the water, the movement creates a force that pulls the water up. Gravity tries to pull that water back down again, which creates a column of water. The cat closes its mouth just in time to gulp the water column.

Catch a Tiger by the Tongue

Cats do everything with their own sense of time and grace, including drinking. Stocker’s research revealed they lap at the right speed to maximize the amount of liquid they drink. In fact, because of size differences, domestic cats log almost four laps a second, while lions and tigers take less than two laps a second.

1. When did you become interested in the way cats drink?

My interest began just over three years ago, while watching my cat, Cutta Cutta, lap. And I became more curious, until we pointed a high-speed camera at him—and voilà.

2. What tools did you use to learn more about how cats drink?

First, we examined high-speed videos of Cutta Cutta. Then we looked at videos of other cats at the MSPCA, as well as videos of felines at the Zoo New England.

3. Next, we used a mathematical model. But our most intriguing tool was a robotic analogue of the tongue, which allowed us to study the lapping style in more detail.

We don’t really know. Some rodents and birds also lap, but no one has looked at how they do it in detail. There might be many ways to lap.

5. Did you bust any myths when you filmed your cat, Cutta Cutta, drinking?

For sure! For example, when a cat drinks, its tongue curls backward, not forward. And the papillae, or the hooked growths on a cat’s tongue that make it rough, aren’t used at all in lapping.

Cutta Cutta isn’t the first cat to earn fame on her milk break. In 1940, MIT Electrical Engineering Professor Harold Edgerton used a kitty in his strobe-light photography research. His work revealed that cats’ tongues curl backward when they drink. His film was featured in Quicker’n a Wink, which won an Academy Award in 1941.