Home ›
Our Pet Experts ›
Mikkel Becker ›
How Do I Get My Dog to Stop Barking When I Talk?

How Do I Get My Dog to Stop Barking When I Talk? 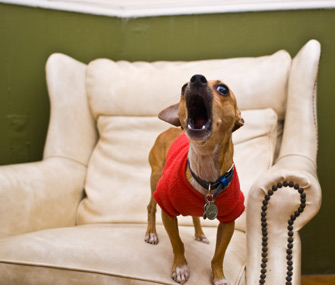 Q. My dog barks anytime my husband and I speak to each other, or when I am having a conversation with someone else. He will only stop barking when I tell him to stop or look at him, but as soon as I start talking, he barks again. Help!

A. It sounds like your dog has you well-trained. He’s learned that if he barks, eventually you’ll take your attention away from the person you’re talking to and pay attention to him. It may seem odd, but scolding him or telling him to be quiet is a reward for your dog. From his perspective it makes sense: Your conversation draws attention away from him, and even negative attention is better than no attention at all.

Every moment we spend with our dogs we are actually training them, often without even being aware of it. Your dog has inadvertently been trained to bark, because when he barks you reward him by looking at him and talking to him. The best way to change behavior that is done to get your attention, particularly disruptive behavior like barking, is to ignore it rather than reward it.

Since your dog has a tendency to bark when you’re talking to another person, turn your interactions with other people into training sessions for your dog. Teach your pooch that barking is no longer going to be rewarded; instead, it will be ignored, and calm and quiet behavior will be rewarded. Eventually, this will make him less likely to bark and more likely to be silent while you are talking.

To teach your dog that barking will not work, ask your husband or a friend to pretend to hold a conversation with you. Your focus, though, will be on training your dog. Look away from your dog while you're talking; turn your head so that you’re not looking directly at him but be sure you can still see him, so that you are ready to reward wanted behavior, like sitting quietly while you talk. Carry on your conversation and ignore your dog as long as he is barking.