Home ›
Our Pet Experts ›
Mikkel Becker ›
How Do I Teach My Dog Not to Bark at the TV?

How Do I Teach My Dog Not to Bark at the TV? 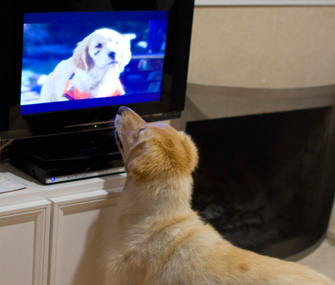 Q. My dog loves to watch television, but he barks at violence, animals and cartoons. It's too distracting to even have him in the room when the TV is on. What can we do to stop the barking?

The television must be a confusing concept for dogs: They see lifelike images and hear common sounds, but the scent and physical presence of the real thing never appears. Some dogs pay little attention to the TV and respond only to certain sounds, such as a doorbell ringing, while other dogs are keenly aware of the entire show. Some have even been known to run behind the set in search of a dog or cat that has run offscreen.

While most dogs have very little interest in television, having a dog that does watch TV can be a humorous and entertaining experience. However, when your dog reacts to images on the screen in the same way he would in real life, TV watching can quickly get tense. Behavior like barking and growling can intensify over time, making it difficult to watch television with your dog unless remedial training is done.

It sounds like your dog is quite sensitive to different sights and sounds on the TV; this type of pet may require more training than a dog who reacts mainly to specific cues, like the sight of a cat or the sound of a doorbell. Sometimes dogs that are sensitive to small changes, such as those on TV, are also generally sensitive to changes in their environment, such as being sensitive to sounds or reacting to sights when out on walks. If your dog is reactive outside of television watching, training should be addressed by a professional, starting with your veterinarian, because he could have deeper-rooted behavior issues that need in-depth help.

If your dog seems to react only to specific sights and sounds on TV, there are some practical ways to help your dog relax.