How Dogs Get to the Westminster Dog Show 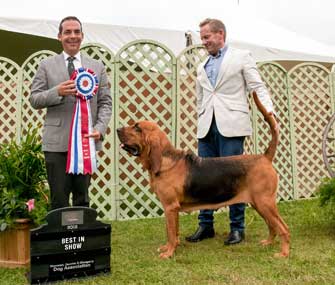 Susan LaCroix Hamil
This will be Roulette's first trip to Westminster.

The nation’s most prestigious dog show is a combination of an invitation-only affair and a scrimmage by mail. Invitations go out to the top five dogs in each breed, as determined by the number of points they earn at shows throughout the year, plus all the national specialty winners (assuming they aren’t already in the top five). The rest of the available slots (2,845 total this year, including 91 junior showmanship competitors) go to the lucky dogs whose entries are opened first on the day they are all delivered to the Westminster Kennel Club for processing.

Can any dog have his day at Westminster? The show was for a time limited to champions, but this year it is open to any dog who has earned points toward a championship. Even so, getting a dog to Westminster takes a lot more than just the luck of the draw. The canine competitors are the equivalent of professional athletes, says Bloodhound breeder Susan LaCroix Hamil of Laguna Beach, Calif., who over the years has had one dog make it as far as the Best in Show group and several Hound Group placements and breed wins at the prestigious show. This year she’s showing GCH CH Quiet Creek’s Kiss and Tell (just plain Kiss to her friends), a bitch who has twice won the breed at Westminster and is bowing out after this show. Hamil is also introducing a new bitch, GCH CH Quiet Creek’s Double or Nothing for Heather (known as Roulette).

Hamil says dogs must be in top physical condition not only to get a look from the judge but also to withstand the rigors of being on the road and the stress of competition. Like any great athlete, the dogs eat right and spend a lot of time working out, whether that means jogging with a handler, running alongside a bicycle, swimming, spending time on a treadmill or doing dog sports such as agility.

“The Poodles might look frou-frou,” Hamil says, “but if you put your hands on them, those top Poodles are going to feel really strong and fit.”

Labrador Retriever breeder Gayle Abrams of Bellingham, Mass., is showing CH Candy Acres Private Major CGC RN (Hawkeye). At shows she bicycles him around the fairgrounds, and at home he goes on daily walks in the woods or plays with her other Labs. When the weather is bad, Hawkeye works out on a treadmill. To see what makes a top Labrador stand out, Abrams says to look at the “Ts” of the breed: topline, tail, temperament and texture of the coat.

“If you look at pictures of top conformation Labradors,” she says, “there is a straight line from the shoulder down to the tip of the tail with no dips, no waves, no bulges. The tail must be an otter tail, wider at the base and no longer than to the point of the hock [the ankle]. They have a loving personality, not aggressive or timid; and a double coat — a fine inner coat that keeps them warm in the water and the coarse outer coat that repels water and keeps them dry.”