How People Who Travel With Cats Pull It Off 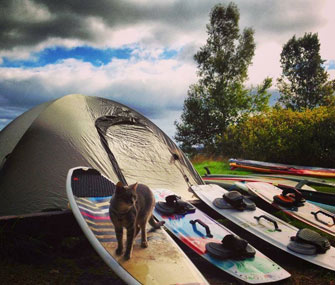 Courtesy of Dr. Ken Lambrecht
Here, Little Bug, the traveling cat, is experiencing a camping and hiking adventure in Michigan.

Traveling with cats? No one travels with cats, right? Tell that to Lily, who goes on trips around town with her owner, Lori Cowell, in Florida. Or try to convince Bug, who just got back from a journey to Europe with her constant companion, veterinarian Dr. Ken Lambrecht.

Their stories may sound like fantasy when many of us struggle just to get our cats to a vet appointment. But more cats do it than you might think — and even if your cat isn't the type, you can still learn something from how these owners keep their pets happy on the road.

Know Your Cat, Then Start Slowly

Ask anyone who's done it successfully, and she'll tell you the first step in making travel fun for a cat is to pick the right cat.

"I call her 'puppy cat,' because she is more like a dog than a cat," Cowell says of Lily, who she got from a shelter at 11 months old after her original owner died. "She loves people; she loves to he held; she loves to be carried. My other cat would run under the bed when the door opened. She runs to the door."

Dr. Lambrecht calls cats with the right temperament "adventure cats." "These are cats who are ready to go from the get-go," he says. Bug was like that from the beginning, when he got her as a 12-week-old kitten. Looking at a photo of her litter of six, he says, "You can see it in her eyes, looking at me like, When are we going?"

Of course, even with the right temperament, you need to work up to the big adventures. Cowell says, "I started taking her on errands with me, getting her used to the car, taking her to neighbors' houses." Now Lily accompanies her on overnight visits to friends' and hangs out at the salon. "I put her down, she looks around and the next thing you know she's sitting on someone's lap."

After Dr. Lambrecht successfully took Bug camping and hiking for the first time, she started to accompany him to other activities. At one point, a friend was moving to Washington, D.C. and wanted company, so the two of them flew there with her. After that trip went well, Bug started going to veterinary conventions, finally leading to their recent trip to Spain and Portugal. "People got a big kick out of it," he says. "Everyone wants a cat fix, so they come up and pet her. Now she has her own business card and six or seven hundred fans on Facebook."

Even as you gain experience in traveling together you still need to be observant of your cat's behavior and not push beyond her limits. Lily, for example, generally loves dogs but not so much her own kind. "I dog-sat for a weekend, and she loved playing with him," Cowellsays. "Not other cats, though — she's not a cat person."

And not every journey may be right for your cat, even if she enjoys traveling. Cowell recently took a trip to Washington, D.C. but left Lily behind, because she was staying with a friend whose dog is not friendly. "I know what works for her. I wouldn't put undue stress on Lily," she says. "She's not a nervous cat, and I don't want to make her one." 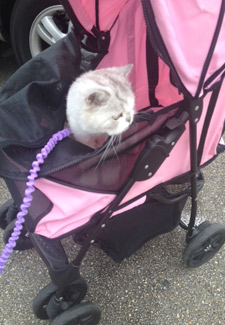 Courtesy of Lori Cowell
Lori Cowell calls Lily a "puppy cat," because she seems more like a dog than a cat.

Keeping the cat safe is the first priority for all traveling pet owners. Cowell and Dr. Lambrecht go places with their pets, because they're confident they have cats who won't run away, but they both still have leashes and harnesses on them.

"I have heard horror stories about cats getting loose on the road, so I keep her in a harness, and if I stop, I put the leash on her," Cowellsays.

Dr. Lambrecht says that microchipping is essential, and he is also about to get a new GPS collar that's small enough for a cat. He has an airline-approved carrier, but usually carries Bug in a breathable bag that goes under his arm. "She loves to be in bags, so she snuggles in there."