How People Who Travel With Cats Pull It Off

It's important to have a plan for letting your cat do her business. On her overnight trips with Lily, Cowell uses a disposable litterbox with a peel-off top. Dr. Lambrecht has a covered box that he keeps in a big bag. Then, he says, all you have to do is watch your cat's behavior. Bug slept for most of the nine-hour flight from Spain, so it was pretty clear when she needed to go. "If you think about it, cats sleep 70 percent of their life, so as long as you take care of her litterbox issues, she's totally comfortable in her bag," he says. "I can tell when she's restless, and I had to get the box down from the overhead and go into the lavatory and let her do her thing."

He says he's done the same in bus stations, on a train and even on his friends' sailboats. "I leave the litterbox covered — you want to be a good guest — and when she paws on the litterbox, I take the top off." 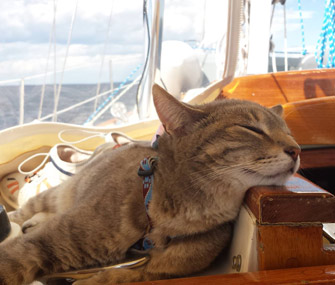 Courtesy of Dr. Ken Lambrecht
Little Bug enjoys chilling out on boating trips but, of course, safety comes first. Her owner notes that in this picture she's lying on her custom-made life vest.

Every Cat Has to Travel Sometime

Even if you don't have an "adventure cat," every cat is going to have to go somewhere at some point: if you move, say, and, of course, to go to the vet.

"We do a very poor job of socializing kittens," Dr. Lambrecht says. "They need to go other places and do other things. Any amount of travel ahead of time is going to make the time they have to travel easier."

Work on getting your cat used to a carrier and the car, even when you're not going anywhere. At Dr. Lambrecht's practice, they actually provide an opportunity for cats to go visiting — it's called Cat's Night Out. Five to 10 cats go each month to hang out and socialize with each other. Though they're cats who already have the right temperament, he says, practice helps: "They do get better with multiple visits, as long as there's treats and it's a fun visit."

Some of these cats also go other places with their owners. "We have a number of people whose cats go backpacking with them. It's not that rare, I think," he says. "It's a paradigm shift — there are more cats than dogs now, and the younger generation says, 'I want my cat to come with me.' No one told them you couldn't do that."

And Dr. Lambrecht says that though not all cats are suited to go on adventures, there may be more of them than we think.

"We've underestimated what cats can do," he says. "Start young, start with one who shows the right temperament and then nurture that from a young age by small positive experiences."

From those first small steps, who knows where you'll end up — maybe even in Spain. "I never planned any of this. I just kept taking it to the next sensible level," he says. "Now that I know the path, I think it might open up the possibility for other people."