How Petting a Dog Benefits the Pooch — And You 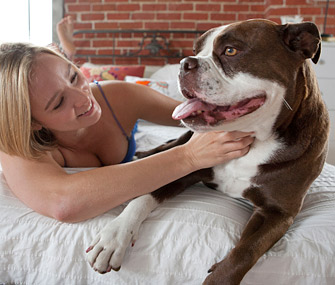 Blend Images / Alamy
Many dogs enjoy being petted on the the chest, shoulder and base of the tail.

Touch between a human and a dog can have therapeutic benefits for both species. In humans, petting a dog can trigger the release of the bonding hormone oxytocin.Feeling that fur can also lower your heart rate and blood pressure.

Touch also serves to soothe a mildly upset or anxious canine. However, be cautious: It has little impact—and may cause further anxiety—if your dog is overly stressed.

Dogs derive the most benefit by being caressed in the right places with a nonthreatening approach.

Where to Pet Your Pooch

In general, canines prefer being rubbed on the the chest, shoulder and base of the tail. Your dog may have additional special places where he likes to be stroked, such as on the base of his neck or between his ears.

There are also sensitive areas where your hands are less welcome: Touching his ears, paws, end of tail, top of head, muzzle or belly could upset your dog. Specific situations in which your dog must tolerate being handled in these places, like during nail clippings, will occur. But as a general rule, avoid petting such spots until youknow what makes him comfortable.

Physical restraint, such as grabbing your dog’s collar or holding him in place can evoke fear. Your dog may perceive this type of touch as threatening, causing him to exhibit signs of aggression or attempt escape.

Petting as a Reward

Touch is a useful, but underutilized, way to encourage certain behaviors. Many owners offer verbal praise — “good boy!” — when their canine does something desirable. However, a recent study found that dogs actually prefer petting more than verbal affirmations, making iteffective as an immediate reward for positive behaviors.

Petting can help maintain pleasant manners, such as calm greetings — give your dog a little rub when he keeps all four paws on the floor, rather than jumping up on your guests.

However, it is important to note that petting may not be sufficient in all situations. For instance, petting your pup for coming to you when called is a fine reward—while in your own backyard. In a more distracting situation, like the dog park, petting may not serve as an adequate reward. Your furry friend might disregard your call in favor of playing with the other pooches. Paying careful attention to your dog’s body language will allow you to understand what training rewards work best.


Although you know your own dog's preferences when it comes to touch, be cautious when petting a dog you have not previously met: Not all dogs welcomea pat from a new human.

Thinking carefully about how you approach unknown dogs:Creating inviting body language encourages a dog to approach on his own terms. Turn your body sideways and avoid direct or prolonged eye contact. With more hesitant dogs, kneeling or sitting may be best. Never reach over the top of an unfamiliar dog to pet him; instead, reach in from the side.

When a strange dog approaches, slowly extended your hand to pet a neutral area, like his chest; if he backs up, turns away, cowers or stiffens, he does not want you to pet him. Keep in mind that a canine approaching is not necessarily an invitation to touch him — he may simply want to sniff you.

Upon first meeting, a new dog might roll over to greet you. But, do not be tempted to caress his belly. This submissive roll is often an appeasement gesture, and though you mean well, stroking a dog while he is in this vulnerable position could make him feel threatened or upset.

The speed and intensity with which you touch him may also affect a dog’s emotions. A slow touch, gentle pressure and rhythmic strokes in the direction of the dog’s fur is usually well received. Quick, shallow pats or approaching as if to wrestle-play can overly arouse a dog, or cause him to avoid you altogether.

If you are ever unclear whether or not a new dog is enjoying your interaction with him, pause your motions and watch the way he reacts: If he moves away, he's likely had enough. If the pooch remains near you, he might want a little more loving.