Home ›
Our Pet Experts ›
How to Feed a Growing Puppy, From Small to Large Breeds

How to Feed a Growing Puppy, From Small to Large Breeds 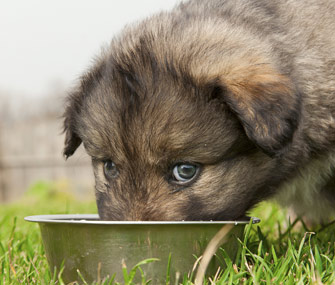 Thinkstock
Large-breed and small-breed puppies have different feeding requirements as they grow.

If you've ever had a puppy, you know they grow up quickly — but their rate of growth and the amount you should feed them depends on the size of their breed when full grown. A newborn toy puppy may increase his birth weight by a factor of 10 to 20, while a newborn giant-breed puppy may increase his birth weight by a factor of 50 or more. All puppies grow fastest when they're very young, but the period of rapid growth lasts much longer — up to about 12 months of age — for the largest dogs. Because of this difference, large-breed and small-breed dogs have different feeding requirements as they grow. Here's what you need to know to make sure you're feeding your puppy the right nutrients in the proper amount.

It might seem that you should heap your large-breed puppy's bowl full of chow so he grows big and strong. But research suggests feeding large-breed puppies too many calories may contribute to the development of skeletal disorders such as osteochondrosis and hip dysplasia.

Calories are vital for growth and activity and very young puppies require at least twice the calories per pound that an adult dog does, but too many calories may lead to excess weight, which can put more stress on growing bones. That's why it's important to feed a large-breed puppy food with a controlled calorie content designed for healthy bone growth without excessive weight gain. Ultimate size at maturity is genetically programmed; large-breed puppies fed a complete and balanced diet who grow more slowly will still reach the same size, just a little later —and chances are, a lot healthier.


Protein is important for building muscle, which in turn helps develop sound conformation. In general, large-breed puppies should eat a puppy food with more than 25 percentprotein to help support muscles and tendons.

Calcium is frequently added by owners of large breeds in the belief that it's needed to form strong bones. But while it's true that a calcium-deficient diet can result in weak bones, a calcium-excessive diet can do just as much harm. When too much calcium is absorbed, the body may deposit it on bone tissue, whether the bone needs it or not. As this continues, the bone is reshaped in ways that can lead to skeletal abnormalities. Calcium levels must be adjusted along with calorie level so that a puppy eating the proper number of calories is also eating the proper amount of calcium. This is another reason you can't just give a large-breed puppy less of a regular puppy food or more of an adult diet food. The calcium (as well as the important calcium-phosphorus ratio) will likely be wrong for a growing large breed.


What's a large-breed owner to do? The best bet is to feed a commercial food specially formulated for large-breed puppies. Don't add supplements, especially not calcium, and don't overfeed your puppy.

Toy breed puppies have their own special needs. Because of their small size, they may be susceptible to a potentially fatal condition known as hypoglycemia. If they don’t eat often enough or if they use a lot of energy from playing or being stressed or chilled, their body can deplete its stores of glycogen. When that happens, the body starts breaking down body fat for energy. But because small puppies have little body fat, that energy source soon runs out. The body runs out of sufficient energy, and the brain, which is highly dependent on glucose, is one of the first systems to fail. The puppy becomes abnormally sleepy, weak and uncoordinated, to the point he may not even eat when offered food. If he doesn’t eat, the condition can progress to the point the puppy has seizures, loses consciousness and dies. Toy puppies are especially at risk up to 12 weeks of age, and some can be susceptible even as adults, due to other health conditions.

To avoid hypoglycemia, feed toy puppies frequently. A young (under 4 months) toy puppy should be fed about four to five times a day. From about 4 to 7 months of age, he can eat four times a day; from 7 to 9 months of age, three times a day; and by the time he's 12 months of age, twice a day. When the dog can't be fed as often as suggested, he should be kept warm and quiet so he doesn't expend a lot of energy. To avoid a roller-coaster effect with blood sugar levels, be very careful and consistent about what, how much and when you feed your puppy.

Toy puppies have little teeth, so they do better if fed a small-kibble food. Your best bet is to buy a commercial food specially formulated to meet the needs of small-breed puppies.