How to Pick the Perfect Collar for Your Dog 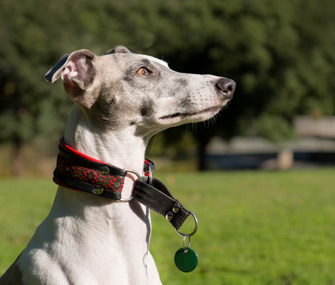 The martingale collar consists of a length of material whose two ends are attached to another piece, which the leash attachesto, so that the collar tightens when pulled. It has a limited choking effect, as it tightens only to a fixed degree, unlike a choke chain.

There is another category of collars called corrective collars that include choke, slip and prong collars, which close in a choking motion when pulled. I didn't go into detail here as I don't recommend them. The collars can cause pain and physical harm, such as strangulation from a choke chain that gets caught on something, tracheal or neck injury from pulling on a leash attached to a choke chain, or welts from an improperly fitting prong collar. I've found that walking devices such as front-clip harnesses and head halters, combined with reward-based training, are more humane and effective than corrective collars. Stay tuned — these harnesses and halters will be covered in an upcoming article!
More on Vetstreet.com: