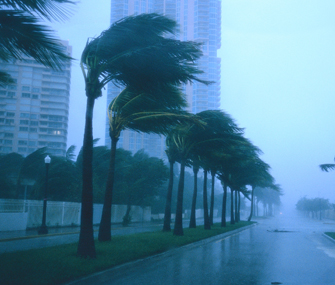 Everyone should have an emergency disaster plan, including preparations for those furry family members. Of course, living in an urban area presents a few extra challenges, so we reached out to emergency management experts for advice on what pet owners should do now to prepare for everything from a future tornado (yes, they can touch down in major cities) to a big hurricane.

You should have ample warning when it comes to a hurricane. But in some cases you'll be stuck indoors, possibly without power.

Hurricanes can rage for hours, so if your pet panics during storms, you may want to invest in a calming product, like the Thundershirt. A blanket draped over a crate can also help soothe a storm-skittish pet. It's advisable to have one crate per animal — and get them used to being crated before an emergency arises.

Of course, hurricanes also bring up the possibility of evacuation, which can present special challenges in a city. "If you're living in an apartment and you have more pets than hands, can you safely evacuate your pets if you were alone?" asks Madeline Bernstein, president of the Society for the Prevention of Cruelty to Animals Los Angeles.

"If you have an older pet, it may not be able to walk down the stairs in the event of a power outage," adds Allison Cardona of the ASPCA's Field Investigations and Response Team. Her solution: Purchase a dog sling. "With two people, you can even put a larger dog in a sling," she says.

Once you're out of the apartment, transportation can also be tricky for city dwellers. Cardona suggests organizing an evacuation carpool with neighbors, as well as trading keys, so that you can check on each other's pets.

You should also be prepared to use public transit in the event of a natural disaster because, as Bernstein says, "Your car could be under the house." Many public transit systems allow pets in carriers — during Hurricane Irene, owners in New York City were able to bring leashed and muzzled pets on the subway.

As for an evacuation destination, draft a list of hotels that take pets outside your immediate area, keeping in mind that there will be competition for rooms. And if you're going to a shelter, prepare to be separated from your pet. Although more cities are including pets in disaster planning, separate animal shelters are more the norm, so make sure that your pets are up-to-date on their shots and have ID tags or microchips.

When it comes to twisters, you may have some warning, so take advantage of this when you can. If a tornado watch is broadcast — this means that conditions are favorable for the development of a tornado, not that one has actually been spotted yet — confine your pets to a safe room, ideally in their crates or carriers. You don't want to be chasing them down when a warning is officially issued.