How to Properly Remove Ticks: Common Myths and Foolproof Methods 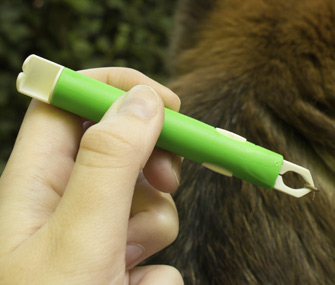 The information in this article has been reviewed and updated.

It's going to be summertime soon, when the living is easy — unless you have a pet who will be spending lots of time in the great outdoors. Spring and summer are the most popular (and prolific) seasons for ticks, and they’re a problem you should be prepared for. “Ticks are dangerous,” says Dr. Rick Alleman, DVM, Ph.D., a researcher on vector-borne diseases and a professor of veterinary medicine at the University of Florida. “They transmit much more than Lyme disease.” In fact, some can emit as many as four or five pathogens, and cause infections in humans and pets. If a large number of ticks infest a pet, they can suck so much blood that your pet can become anemic — a good reason to nip the prospect of ticks in the bud.

Fortunately, there are several products that can protect your pet from picking them up in the first place, as well as foolproof techniques to remove them. But there are also popular myths out there that won’t actually fix the problem. Read on for expert advice on what you should do when ticks attack.

Petroleum jelly, burning them off, freezing them off, nail polish. These are just a few of the common folk remedies that pop up when you google tick removal. And all of them won't work — and have the potential to further hurt your pet.

“These techniques are not viable options,” says Dr. Alleman. “The problem is that I’ve never seen a tick back out. Their head remains embedded in the animal’s skin.” And this is precisely the problem with petroleum jelly and nail polish: Pet owners think that they can drown or kill the tick, but the head stays in place.

Then there's the burning method. Fact: Lighting a match anywhere near your pet is the very definition of playing with fire. “This should be common sense,” says Sabrina Wehrhan, lead veterinary technician at St. James Animal Hospital in St. James, New York. “The dog has hair. The hair is going to go up in flames.”

She also recommends not toying with the idea of freezing ticks, which some owners try to do by using an aerosol-based liquid freezing gel. “For one, you’re not a veterinary professional, so you won't know how long to hold it on,” says Wehrhan. “I’ve seen people just spray and spray.”

The Best Way to Remove a Tick

“Simply pull them out using tweezers or a tick remover,” says Dr. Alleman.

The latter is a tool that's specially designed for safely and quickly removing ticks. “There are a couple of types,” explains Dr. Alleman. “One functions as blunt-ended, plastic tweezers. The other I’ve seen is called the Tick Key, a little gizmo that resembles a bottle opener. The hole in it comes down to a very thin point, so you can kind of slip the tick into this hole, slide the tick down to the end and basically lift — just like you would remove a cap off a bottle — and it pulls the tick out.”

Your technique is equally important: Start by parting your dog’s fur where you see a tick, and then “pull it out by the body, so as not to twist or pinch the head off,” says Dr. Alleman.

And be sure to take extra care if you're using a tick-removal aid, like tweezers. “With tweezers, you need to be careful that you don’t squeeze the head and neck of the tick so hard that you break it,” he says. Instead, apply enough pressure to grab the body right where the head and neck attach — and don’t leave the head embedded.