How to Recognize and Report Animal Abuse 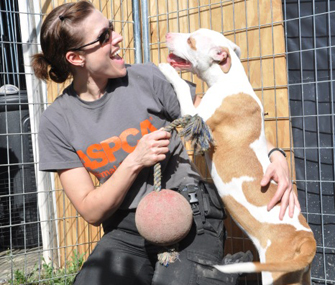 Photo courtesy of the ASPCA
Whether you are a pet owner or not, do your part and learn to recognize and report animal abuse.

Animal cruelty is a heartbreaking issue that often inspires people to take action to prevent it. While some try to make a difference through educating communities or passing legislation, others try to watch for signs of animal abuse around them so they can report it and stop the perpetrator before an animal loses his life. However, it’s not as easy to recognize the signs of abuse as some may think. We spoke to experts at the ASPCA about how you can recognize abuse, report it to the right individuals and potentially save lives.

The first step to recognizing animal abuse is having an awareness of your neighborhood and the people living around you, says Howard Lawrence, senior director of operations for the ASPCA’s Humane Law Enforcement department.

“People should be aware of what’s really going on in their neighborhood. If a dog in your neighborhood who usually looks healthy suddenly looks thin, that could be a sign of abuse, neglect or disease where the dog gets ill and is not receiving proper care,” Lawrence says.

Outward signs are the easiest to recognize in an animal who is possibly being abused. These signs include emaciation, untreated skin conditions, overgrown hair, lameness, lethargic movements, collars that are too tight and inadequate shelter from outside elements.

An animal’s behavior could also be a sign that something is wrong, but that's harder to interpret.

“Behavior is not a good sign of abuse because there are so many factors. Most people who see an animal afraid of men with beards, for example, say they must have been abused, but usually that’s not the case,” says Dr. Randall Lockwood, senior vice president of the ASPCA’s forensic sciences and anti-cruelty projects. “What we find is there are lots of reasons for fearfulness or hand shyness that are unrelated to abuse. Often it has more to do with socialization or lack thereof… Physical condition is a better indicator than behavior.”

As for aggressive behavior, Dr. Lockwood says this can also have origins other than abuse and can be the result of protectiveness or challenging. It is important to note whether or not this behavior is directed toward one individual or strangers in general as well. Behavior directed always at one person could mean that person in particular has negatively impacted the animal.

In some cases, pets who are victims of abuse may not show any signs at all. According to Dr. Lockwood, pets can also be very bonded and kind toward their abusers in ways similar to how children can bond with their abusers. In the end, deciding whether or not an animal is being abused means being as observant as possible when you think something is wrong.

“People should look at the pet and its surroundings to get as full a picture as possible,” Lawrence says.