How To Stop Your Dog From Stealing Food 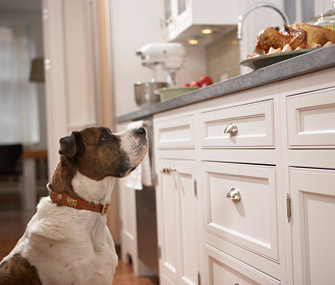 Have you ever experienced a moment of shock and disbelief when the sandwich you just made disappears from the counter the moment you turn your back? Then you look down just in time to see your dog happily licking the last bit of mayo off the top of his nose. Guilty dog!

Counter-surfing is a trainer's term for when a dog steals food off counters and tables. Some dogs are extremely skilled in this behavior and only do it when their owners aren’t looking, while others will grab food even with their owners watching. But, however blatant or sneaky a dog is with his counter-surfing, the solution isn’t to punish him. It is the pet parent's responsibility to take proper preventive measures.

The behavior of scavenging, or eating leftover food, is so deeply ingrained in canines that it’s second nature. Scavenging may even be one reason why dogs became dogs. There is evidence that the earliest dogs were wolves who scavenged from human settlements thousands of years ago. The behavior is also self-reinforcing — it provides its own enjoyable reward. All of this makes counter-surfing a difficult habit for owners to break.

Food left laying around is considered fair game. You can better understand this behavior by watching dogs interact with one another around food. If a dog is guarding or hovering over a bone, it’s unsafe for another dog to approach the chew. But as soon as the first dog walks away or disengages from the bone, it signals to other dogs nearby that the food no longer belongs to a specific dog. Similarly, a pooch is less likely to grab food off the counter when a human is next to the food, probably because he considers the food to be in the human’s possession. But as soon as food is left unattended, there is nothing to stop a dog from seeing the food as a community morsel.

Since dogs are scavengers, they'll seize the chance to grab a tasty treat conveniently located on the counter or coffee table. They don’t understand that their food is supposed to come from a food bowl or a food puzzle; they're in search of any opportunity to dine. When a dog is able to snag a meal off the table, it’s very likely he will attempt to find food there in the future because his scavenging behavior was positively rewarded with a palatable treat.

Reprimanding the dog will not prevent future counter-surfing. Often the punishment is given too long after the fact for the dog to connect the punishment with his stealing the food. Aversive training with booby traps, such as cans that fall, an alarm that goes off, or even a motion-detector sprinkler, often creates an anxious dog and hinders the human-animal bond. That is a high price to pay for a behavior that can be prevented through management — and it’s not a guarantee the punishment will even work. The occasional payoff of getting the food will push many canines to try again, even if they get in trouble.

How You Can Help

The easiest tool to prevent counter-surfing is management. Use baby gates or fencing to contain dogs in areas of the home that are away from the kitchen or dining areas. When food is left unattended, it’s critical to involve the entire family in keeping messes cleaned up or containing the dog. For dogs who steal food in the owner’s presence, teach the “leave it” cue to stop them from grabbing food. In my dog training classes, we prepare dogs for real-life situations by teaching them to leave unattended food or food dropped on the floor with the "leave it" command while the owner is present.

Training dogs to “leave it" and preventing access to unattended food in the first place are much more reasonable — and effective — approaches to counter-surfing than any punishment.