How to Train Your Cat to 'Leave It' 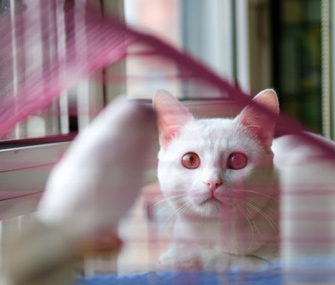 Unlike dogs, most cats don't generally pounce on and swallow items they come across before you can stop them. That's fortunate, because unlike dogs, it's not so easy to teach your cat the "leave it" command. But that doesn't mean it can't be done.

With cats, though, you're more likely to want them to leave household items or pets alone rather than resisting the urge to inhale dropped items. You want your cat to learn to leave your pet birds, fish and rodents alone. This will be much easier if you're starting with a kitten, especially a kitten who has been raised indoors rather than one from a mother who may have hunted for him.

Teach Your Cat to Ignore Other Pets

Of course, your first line of defense is a secure cage for your smaller pet. No matter how well-trained your cat appears to be, don't take chances. Never leave your bird or other small pet loose when you're not there to supervise. For birds, keep them in a strong cage that cannot be tipped over by your cat. Ideally, the cage should hang from the ceiling. The bars or wires in the cage should be too small (no larger than half an inch) to allow your cat's paws through, and the cage should be large enough that the bird can feel safe by retreating to the other side. For both birds and rodents, a barrier or box should be available so that the bird or rodent can take refuge if the cat is upsetting them. Fish tanks should have a secure hood and should be seated on a sturdy stand. Goldfish in outdoor ponds should have things to hide under, such as lily pads, and a large enough pond so they can take refuge away from the edges. Netting may be the only way to save them from cats with a knack for fishing.

Cats and birds should never be out and loose in the same room together. Do not allow cats and birds to come in contact. All it takes is one second for the bird to slip out of your arms and take flight, enticing the cat to jump at it and catch it in its mouth. The cat is a predator; the bird is prey. It's instinctual for the cat to want to catch the bird (even if the cat doesn't mean harm and just wants to play). Invariably, cats' teeth puncture birds as they carry them around in their mouths, plus cats have Pasteurella sp. bacteria in their saliva, which can be fatal to birds through bite wounds.

You can, however, train your cat to ignore the birdcage while you're present. Reward your cat for calm behavior near the birdcage by giving him a special treat. Each time he attends to you instead of the bird, give him another morsel. Introduce the cue "Leave it" just before you give the treat. Now when the cat looks at the bird, say, "Leave it," and as soon as he looks at you, give him the treat.

If the cat instead tries to paw at the cage, tell the cat "No!" and firmly hold him. Tell him to leave it, wait until he glances at you, and then give him the treat.

Besides ignoring your other pets, you may want your cat to learn to leave your food alone. The best way to dissuade your cat from grabbing your food off your plate is to teach him not to jump up on counters or tables in the first place. But if he does jump up, you can teach him to leave your food alone by never allowing him to get away with stealing or begging for food. Say "No!" and place him on the floor if he tries. You can also teach him the "leave it" command, as follows: