"I Train Guide Dogs for the Blind" 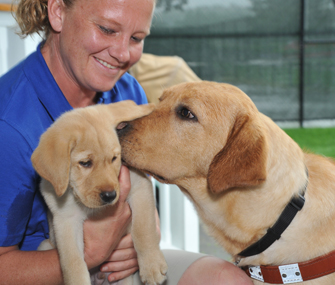 Photo Courtesy of Guiding Eyes for the Blind
Jamie Nash with one of her experienced guide dogs and one of the puppies-in-training.

Jamie Viezbicke didn't start out wanting to be a guide dog trainer. "I have a degree in marine biology — I wanted to be a killer whale trainer," she says. "But it's hard to get your foot in the door in the marine mammal field."

Viezbicke was hired for an entry-level position at the Bronx Zoo, and figured she'd eventually use the animal experience to move to a job in an aquarium. That's not quite how it worked out.

"I started in the large mammal department and fell in love with the terrestrial animals," she says. Viezbicke worked with elephants, rhinos, giraffes and big cats, and learned how to clicker-train tigers in behaviors that helped keepers care for them.

"We trained them to come forward so we could inspect them daily, and sit at the bars and place their paws up on the front of the bars so we could check their pads," she says. "While I was there we were able to successfully train the first tiger for a voluntary blood sample through the tail without giving any sort of sedation."

With that experience, Viezbicke moved to a job at a theme park in New Jersey where she oversaw demonstrations of similar behaviors for an audience — this time with no bars between her and the tigers. After a couple of years, "I was done kind of putting my life in danger every day," she says. "I knew I wanted to keep training animals. I wanted to find an opportunity where I could train them for a better purpose."

About six years ago, Viezbicke found that opportunity at Guiding Eyes for the Blind, where she now works as a guide dog trainer.

From Wild Animals to Guide Dogs

Most guide dog trainers don't have a background working with wild animals, but Viezbicke's experience was more relevant than you might think. Guide dogs used to be trained with traditional methods. "The dog was modeled into the response by physically manipulating them into the different positions or the different behaviors, then correction was added in later on," says Graham Buck, assistant director of training at Guiding Eyes.

Now, instead, they basically use the same methods Viezbicke used with tigers — a clicker or verbal "yes" marker that tells the dog when it's going to be rewarded for the correct response. This kind of training results in a dog that is better at handling the unexpected.

"They're extrapolating from their training at all times, so that just because I tell the dog 'forward' doesn't mean the dog is going to jump into the Grand Canyon," says Buck. "Ifthe dog sees a vehicle or a manhole cover or construction, it's going to say OK, I'm going to go forward because you asked me, but I'm going to find another way around."

Positive-reinforcement training with rewards encourages this kind of problem-solving ability, because the dogs are not afraid of making a mistake. The training process takes a little longer now, but it's worth it, says Buck. "You get a dog that still has its autonomy and a bigger knowledge base to pull from when it comes upon a complicated situation," he says. "The dog doesn't say, I only know one or two things, and if I do another I might get in trouble."

Trainers do still use negative reinforcement in training, says Buck, but only "in two areas which we call nonnegotiables: the dog going toward other animals, and eating food off the ground. Because we're never going to ask that dog to repeat that behavior — we're never going to say, go get me a bagel off the ground or go chase a squirrel up a tree."