Home ›
Our Pet Experts ›
Mikkel Becker ›
Is It Ever OK to Tease a Dog?

Is It Ever OK to Tease a Dog? 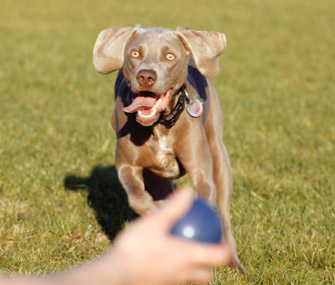 Thinkstock
Pretending to throw a ball to your dog may seem harmless, but teasing can have serious consequences.

Q. When my son plays fetch with our dog, he pretends to throw the ball and then hides it behind his back. I think he’s teasing her, but he says they’re having fun. Is this bad? Should I make him stop, or is it OK to tease her sometimes?

A. You’re right; your son is teasing the dog — and he needs to stop. Teasing isn’t harmless, and it isn’t fun for your dog. When a dog is teased, she may become frustrated, frantic and agitated — and the play interaction can go seriously and dangerously wrong.

Your son doesn’t seem to be aware that he’s teasing the dog; most likely, he thinks that he’s making their game of fetch more interesting by hiding the ball from her. Teasing can come in a variety of forms: offering a treat or toy and then pulling it away, hiding it or placing it out of the dog’s reach; encouraging a dog contained by a fence, leash or tether to chase or grab something out of her reach; or physically pestering a dog by blowing air at her nose, grabbing at her muzzle or tail, or poking at her body.

I suspect that your son does not understand the frustration that your dog may be feeling when he plays with her in this way. He sees her behavior — jumping up, whining, barking, frantically searching for or grabbing at the ball — as a sign that she is enjoying their game. In reality, though, this type of behavior is an indication that your dog is becoming stressed and agitated.As these negative emotions build, so does the potential for a problematic or dangerous interaction.

The Consequences of Teasing

Teasing a dog can have some serious consequences. Teasing may cause a dog to be hyper, unmannerly and largely out of control. Consistent teasing may also damage the dog’s relationship with humans. She may learn to avoid or distrust anyone who regularly teases her. Teasing also increases the possibility of a bite. Teased dogs are often on edge; as their tolerance decreases and their frustration builds, otherwise-friendly and sociable dogs may resort to biting or other forms of aggression.