Home ›
Our Pet Experts ›
Susan Wagner ›
Is Your Dog as Dapper as the Menswear Dog?

Is Your Dog as Dapper as the Menswear Dog? 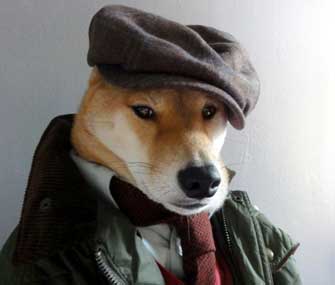 New York Fashion Week is just around the corner, and apparently menswear is going to the dogs this season. We mean that literally.

Fashionistas and dog lovers alike are buzzing about the Menswear Dog Tumblr, which launched on January 27. According to the site's about page, "Menswear Dog is a 3-year-old Shiba Inu living in NYC with a panache for all things style." Bhodi, the dog behind the blog (and in front of the camera), belongs to New Yorkers David Fung, a 28-year-old graphic designer, and his fashion designer girlfriend, 26-year-old Yena Kim.

The dapper dog, who is named for Patrick Swazye's character in the surfer film Point Break, appears on the site dressed in a variety of standard menswear brands (J.Crew, Brooks Brothers, Grant Rugger), all from Fung's closet. Every look has a distinct men's magazine flair and feel, despite the fact that all the clothes are being worn by a dog.

The blog started out as a joke, but it already has a huge following. And it's easy to see why; the photos make Bhodi look like a natural model. But Fung told The Daily Beast that the first photo shoot was anything but easy: “The behind-the-scenes is super awkward. There's all sorts of clips in the back of the clothes, and I’m propping him up. But you get this window of magic between him squirming around,” Fung says.

We'll be keeping our eye on Menswear Dog this spring.