Home ›
Our Pet Experts ›
Mikkel Becker ›
Is Your Puppy Playing Nicely? Is He Being Bullied? Here Are 5 Things To Look For

Is Your Puppy Playing Nicely? Is He Being Bullied? Here Are 5 Things To Look For 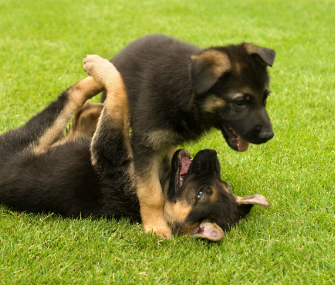 Play has a crucial role in puppy development. Romping around with other puppies or well-mannered adult dogs teaches pups how to read other dogs' body language, how to use their own body language to communicate, and even how much they should inhibit their bite.

Sometimes though, it’s hard to tell whether an interaction between puppies is innocent play or if either puppy is expressing something negative, such as fear or aggression. It's important for the pet parent to know the difference and to supervise play to make sure it’s appropriate. Proper doggy interaction skills are best taught in the first three months of life, a puppy's most malleable developmental stage. Good habits begin to be formed and bad experiences with other dogs will also have a negative effect on their socialization. So it is a tricky time. Here is a list of common puppy play behaviors to help you distinguish whether your puppy is having a good ol’ time or if he's getting seriously stressed.

In play, a dog will bend his front legs down towards the floor while his behind sticks up in the air. Some dogs will make slow, exaggerated play bows and lower their front legs almost onto the floor, while others make fast and shallow mini-play bows that may go unnoticed to the untrained eye. Watch for simultaneous bouncing down on the front legs while the tail end rises a little — that tells other dogs, “Don’t take my actions seriously, I’m just playing!”

Dogs usually alternate roles during play. For instance, one dog may start the game by chasing the other dog, then they suddenly switch roles and the second dog becomes the chaser and the first dog is chased. Other role reversals to look for: one dog herding another, and then letting himself be herded; or one dog lying on his back or side while the other dog towers over him, and then they swap positions. Play roles should be reciprocal and close to equal between partners and should not be one-way.

Dogs won’t use their full strength or bite during play. You will often see bouncy, jumping strides. Rather than running at full speed, a dog will often bounce like a bunny in play, similar to a child skipping. Play movements don’t make sense ergonomically because they are less efficient than what the dog is capable of. But they make sense in play by signaling to other dogs that his actions are all in fun. Playing dogs will also act a little clumsy and will willingly flop over on their sides or backs.

Look for signs that your dog is “smiling” while he plays or when he takes a rest break. His eyes should look relaxed, and his mouth will probably be open and pulled back in a slight smile.

Keep in mind that dog play has frequent time-outs to rest and gain strength. Most dogs will play for 20 to 60 seconds, then take a moment to pause before they go back to playing again. Surprisingly, although most puppies crave social activity with other puppies, actual play sessions usually last for only a few minutes before the puppies are done and ready to rest, sniff or engage in another activity.

Know When To Step In

In some cases, a more forward and exuberant puppy may seem to be bullying another puppy. If you are in doubt about whether the more timid puppy wants to play or is actually showing fear, take the more exuberant puppy and either hold onto his collar or leash to prevent him from jumping at the other puppy. Then watch the reaction of the more timid puppy. If he runs away, hides or disengages completely from the more forward puppy, then play should stop for that pair of puppies. But, in many cases, the timid puppy will keep trying to engage with the other puppy and show signs of wanting to continue play, which indicates a mutual play relationship.

Keep in mind that puppy classes are an excellent way to build up your knowledge of appropriate puppy play. They're also a good place to find playmates for your puppy to meet up with even outside of class.