Home ›
Our Pet Experts ›
Caroline Golon ›
Joan’s Last Wish: How Strangers Saved Christmas for a Dying Woman and Her Cat

Joan’s Last Wish: How Strangers Saved Christmas for a Dying Woman and Her Cat 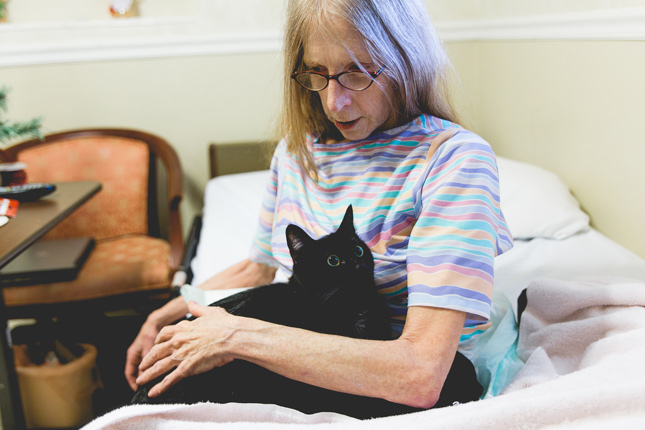 Stephanie Sonju
Joan Price's last wish was to find a new home for her cat, Isis.

Sixty-five-year-old Joan Price of Fort Lauderdale, Florida, has only a few months to live. Price, who contracted hepatitis through a blood transfusion 40 years ago, suffers from cirrhosis of the liver. She is bedridden and cannot stand or walk without assistance. In November, after an unplanned hospital stay, Price checked into a hospice facility.

She has made her peace with her failing health, but she went to the hospice with one lingering concern: She had no one to care for her beloved cat, Isis.

It looked as though Price's last days would be filled with worry about Isis' future — until the kindness of a stranger and a cat-loving Facebook community granted her final wish.

Looking for a Home

“I was so worried. I cried every night,” Price says of those first days away from her cat. “I don’t care about myself. I’m ready. But I care about making sure Isis will be OK.”

Price had taken Isis in after the cat, who had been living outside, gave birth to a litter of kittens. Price had the cat spayed and the two have been together ever since. Even as Price's health failed, her concern was for her cat: Although she knew she would not be returning from the hospice, Price continued paying her rent in order to ensure that Isis had a safe place to live. The building's maintenance manager cared for Isis, making sure she was fed and had a clean litterbox. But otherwise, the cat was alone.

With no local family and few friends, Price wasn't sure where to turn for help. From her bed in the hospice, she contacted rescue groups to ask for help finding Isis a new home. And that’s when Price's luck changed: One organization forwarded Price’s plea to blogger Dorian Wagner, an area woman who often helped local rescues find homes for cats.

The Kindness of Strangers

Wagner was heartbroken to learn about Price’s situation. “I just wanted to help her," she says. "It touched me." Wagner immediately reached out to Price for more information. Once she had verified Price's story, Wagner sprang into action, posting a plea on Facebook. "I just got a sad email," Wagner wrote. "There is a woman named Joan in hospice who is dying, and more than anything else, her concern is for her 2½-year-old cat, Isis."

Wagner's online community immediately responded and offered to help Price and Isis. What began as a few interested friends soon ballooned to hundreds of people inquiring about what they could do, prompting Wagner to start a dedicated Facebook page to provide updates and organize assistance.

Wagner's first worry was taking care of Isis. “I wanted to get her out of that lonely apartment and around people,” she explains. This was easy: One of Wagner’s local friends, Leslie Wynne, agreed to foster the cat. And though Isis was initially nervous in her new home, she soon warmed up to Wynne — and won her foster parent's heart.

But Wynne's house wasn't the cat's final destination. The next step was to find a forever home for Isis. Wagner partnered with Good Karma Pet Rescue and reviewed applications, checked vet references and, finally, made a decision. A friend of a friend in Michigan was willing and able to give Isis a loving new home. Another Facebook friend, who works for an airline, offered to fly with Isis to Chicago, where they would meet the cat's new owner.

It appeared things were working out for the sweet black cat and her loving owner.