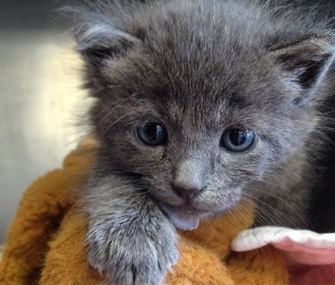 Everyone loves kittens. We romanticize the idea of going to the animal shelter and bringing home a wee kittie or two to love and care for. But the reality is that shelters often struggle to care for kittens, and many kittens are euthanized. That was the inspiration behind the development of a kitten nursery at Austin Pets Alive in Austin, Texas.

“We started the nursery due to the hundreds of orphaned kittens that were being euthanized at our city shelter,” says Casandra Mensing, APA’s bottle baby nursing manager. With 30-plus kittens coming into local shelters daily, something had to be done. “We were given two-hour deadlines to save them," Mensing says. "And it wasn’t enough time to find fosters.” So in 2011, APA created a neonatal kitten nursery,where orphaned, unweaned kittens are fed and cared for by volunteers until foster homes are found.


To date, APA has taken in more than 6,000 kittens. In 2013, the nursery achieved a 90 percent survival rate. So far this year, the shelter has taken in approximately 900 kittens.

But APA isn't the only shelter making room for kittens. Other shelters are also saving tiny lives with dedicated kitten nurseries. In Los Angeles, Best Friends Animal Society’s No Kill LA program recognized that newborn kittens make up almost one-third of the cats euthanized in the city’s shelters every year. That’s because caring for kittens is labor intensive; some require feeding every two hours, around the clock. In addition, space can be an issue: Kittens living in a shelter environment are highly susceptible to disease and need to be isolated from other animals.

But just like APA, NKLA is making it work. A three-room kitten nursery shelters up to 100 kittens, from newborns to those 7 weeks old. Staff and more than 200 active volunteers keep the nursery running 24/7. Kitten season runs March through November, with occasional litters in December, January and February, says NKLA executive director Marc Peralta.