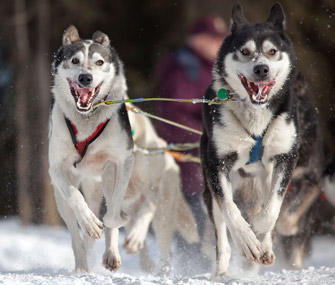 On March 1, the 42nd annual Iditarod sled dog race kicked off in Anchorage, Alaska. The more than 70 mushers who are participating will travel about 975 miles to reach their final destination in Nome. During the roughly nine days it takes mushers to complete the race, each dog team will face unpredictable weather and tough terrain. Luckily there is a group of dedicated veterinarians monitoring the event in case the canine competitors need anything along the way.

The Iditarod’s chief veterinarian, Dr. Stuart Nelson, has been working the race for the last 28 years. He started out as a volunteer trail vet before taking on his current role. According to Dr. Nelson, the race’s vet team is made up entirely of volunteers who typically fall into three categories: consultants, drop dog vets and trail vets. Drop dog vets are stationed at hubs and evaluate dogs who have been removed from a team, while 40 to 45 trail vets, the majority of volunteers, are stationed at various checkpoints along the path to do routine checks on the participating dogs.

In total these vets will perform about 10,000 routine exams during the race, as they make sure the dogs remain healthy during the competition.

Preparing for the Race

Dr. Nelson says one year runs into the next when it comes to prepping for the big race. In late May or early June, he sends out invitations to veteran veterinarians who have worked the race before to see if they’re interested in being part of it again. The answer is almost always yes: About 80 percent of the team are veterans, while the rest are rookies. The next step is to establish ongoing communication between the vets and the mushers.

“A lot of prep goes into making sure not just the vets but the mushers and dogs are ready," says Dr. Nelson. "The first week in December, rookie mushers have a meeting, they take a course, and I speak for three hours about dog care issues." And then, says Dr. Nelson, it's the canines' turn. "Dogs are required to go through a screening starting in February. To be eligible, they must receive an ECG and basic blood work.” These results are then reviewed for abnormalities.

In addition, each dog has a microchip implanted so vets know they have gone through this program. Dogs who are new to the Iditarod are given their microchip during this initial check. Veteran dogs have their microchip number recorded. Each dog must be current on vaccinations and have a physical exam 14 days before the race.

Finally, staff personnel are required to attend a training seminar sponsored by the International Sled Dog Veterinary Medical Association the week prior to the race.

Contrary to what people may think, hypothermia is not a major issue for sled dogs. According to Dr. Nelson, frostbite is the biggest cold weather concern when there is high wind and low temperatures of 20 degrees below or more. Dogs wear protective equipment on vulnerable areas, and vets are on the lookout for frostbite throughout the race.