Little Donkey, Big Love: Animal Lovers Come Together to Save a Miniature Donkey 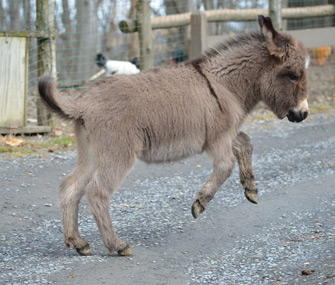 The home of Robert “Bob” Pollock — proprietor of Hudson Valley’s Buttermilk Falls Inn + Spa and adjacent Millstone Farm — is crowded. He lives there with his wife, four-year-old son, newborn daughter and three Poodles. And, lately, a baby Miniature Donkey named Holly has been crashing there too, often napping on the bedroom floor.

The Pollock family is not the first to embrace Miniature Donkeys; celebrities like Reese Witherspoon and Martha Stewart have kept the adorable creatures as pets. But this isn't just a case of someone taking an interest in a quirky pet. A chain of do-gooders are responsible for Holly the donkey’s survival and, ultimately, her happy life on the Pollocks' farm.

Bob Pollock grew up in New York City, an urban kid with a surprising hobby: He belonged to the Brooklyn Botanic’s Children’s Garden and had his own patch of earth on which to grow plants. But it wasn’t until, as an adult, he bought two adjoining properties — a weekend home and a hotel — in Milton, New York, about 90 minutes from the city, that his love of nature was realized on a grander scale. “I wanted to control what I was eating, so I started conceiving a victory garden,” recalls Pollock, who has a degree in biochemistry that enabled his increased focus on botany. “The orchard has apples, pears, apricots, even kiwis.” Pollock’s interest didn't stop at growing his own vegetables. “I read The Queen Must Die, got interested in beekeeping and started raising bees. I built a chicken house and gave hens only organic feed and kelp, so we could have fresh omega-3 superfood eggs.”

Before long, Pollock began rescuing farm animals, often with the aid of the nearby nonprofit Woodstock Farm Animal Sanctuary. These days he keeps about 35 chickens (and serves guests fresh eggs each morning), five peacocks, geese, angora goats and 21 camelids, including llamas, alpacas, even three vicuñas. The Pollocks shear the wool and make six types of yarn out of it, which they plan to market and sell soon.

The Arrival of Bonnie and Clyde 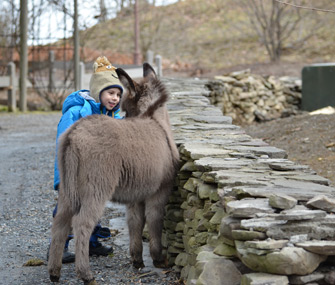 In 2011 Hurricane Irene hit the east coast; properties, including farms, were flooded and crops were threatened and damaged. But agriculture was not the only concern; people and animals were displaced by the storm. Specifically, in northeastern New York, two Miniature Donkeys named Bonnie and Clyde stood stranded on a spit of land, surrounded by water.

They were saved by a good samaritan, the son of an equestrian. And he kept the two animals until the upkeep proved too onerous. His mother called rescue organizations and was finally pointed in the direction of animal lover Bob Pollock. “It’s not just about adopting animals,” says Pollock. “There’s a lot of responsibility: They require veterinary care, ample food and a place to live.”

For Bonnie and Clyde, Pollock built a Donkey House with heat and electricity. “Who doesn’t love donkeys? They’re stubborn, smart and freethinking,” he adds.

The Deal With Miniature Donkeys

According to Cindy Benson — who, with her equine veterinarian husband, owns and runs Benson Ranch in Gold Hill, Oregon, host to about 100 Miniature Donkeys — people within the Miniature Donkey community have a saying: “If you have to ask why you have one, then you haven’t met one.”

Benson first fell in love with the notoriously playful and friendly breed at a horse show, when she (against the advice of her husband, who worried she’d incur the owners’ wrath) climbed right into the donkeys' stall and cuddled with them. Benson's interest led her to research the species, and she discovered an interesting fact: Unlike Miniature Horses, these donkeys are a hearty bunch thanks to little genetic modification.

“Miniature Donkeys are much more a product of natural selection, so they have few long-term health issues and are supposed to live to between 30 and 40 years old,” she explains. “Personality-wise, they’re a cross between a kindergartner and a Labrador dog — tractable, trainable and easy to please.” Benson takes her Miniature Donkeys to community service functions because they’re so easygoing.

Generally, Miniature Donkey foals — or babies — are born at a height of about 19 or 20 inches, hovering in the vicinity of 20 pounds. They most often grow to between 31 and 35 inches tall. (If a donkey grows to over 36 inches tall at the shoulder, it is not considered miniature.) At between three and four years old, they’re considered mature.

Miniature Donkeys remain playful throughout their lives and are happiest with buddies around so they can run, rear and box at each other. Basically, they’re a ton of fun!