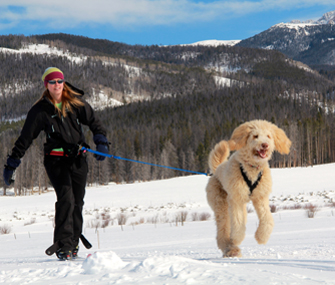 Credit: Ben Young
Surprisingly, skijoring can be done with many dogs, even smaller breeds.

Many dog owners dread winter as the time of year when it's hard to get their dogs enough exercise. Try skijoring, though, and you may do a lot more than solve that problem.

"It's a phenomenal opportunity to deepen your relationship with your dog," saysJohn Thompson, co-author of Ski Spot Run: the Enchanting World of Skijoring and Related Dog-Powered Sports. "It's true teamwork."

What Exactly Is Skijoring?

Skijoring is exercise for both of you. Instead of sitting on a sled and letting the dog do all the work, you're on cross-country skis, propelling yourself along. The dog is out in front on a harness, attached to you by a long line, sometimes adding momentum — and companionship.

What Breeds of Dogs Can Try Skijoring?

You don't need a Husky or Malamute to try skijoring, and some possibly surprising breeds are good at it. Trainer Louisa Morrissey of High Country Dogs in Colorado says serious skijoring racers often have Pointers. "That's how I started," she says. "I had two Pointers and needed to get them more exercise."

In fact, while the lower size limit is traditionally around 30 pounds, Morrissey will allow almost any dog in her skijoring workshops as long as the human's expectations are reasonable. She's taught a number of Pomeranians and even a Shih Tzu. "The woman just wanted to putter around on cross-country skis," she recalls. "Her dog trotted in front of her, and they were absolutely happy together."

How Can You Prepare for Skijoring?

The dog is only part of the consideration, though — the human needs to be ready as well.

"As far as the dog sports go, it's one of the simpler ones," Morrissey says. "Most challenging is probably the human part. A lot of people underestimate cross-country skiing."

Morrissey recommends that you have at least a couple of cross-country skiing lessons — downhill doesn't count, because the feel and technique are different — to learn a few basic skills before taking your dog along. "You need to be comfortable gliding, be able to stop, and stay up on your skis, say, 80 percent of the time," she says.