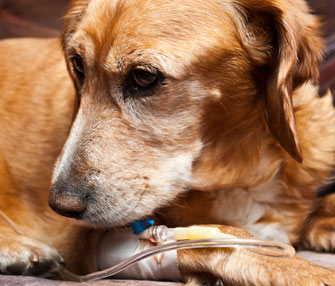 The New York Timesrecently published an article written by Memorial Sloan-Kettering Cancer Center oncologists about how the escalating cost of cancer drugs adds a new obligation to the physician’s side of the conversation regarding cancer care: the consideration for the financial impact of the recommended treatment on the patient and their family.

In the spirit of Zoobiquity, which is a recently promoted concept that encourages the sharing of medical knowledge across species and disciplines, veterinarians can teach physicians a few tricks about rolling money, prognosis and quality of life into one conversation. We veterinarians have a lot of experience in this realm since in my oncology practice, pets with cancer and insurance are still as scarce as hen’s teeth, and discussions about finances occur every day in my clinic.

Mayo Clinic physicians recently detailed why cancer treatments are so costly. The expense of human chemotherapy agents also directly impact dog and cat cancer treatment; there are only two cancer drugs specifically approved for use in dogs and not a single cancer drug approved for use in cats. The lack of veterinary-approved chemotherapy drugs means veterinary oncologists purchase drugs to treat your favorite fur person from the same suppliers as do the oncologists at the Mayo Clinic or Memorial Sloan-Kettering Cancer Center. Not all human cancer drugs work in pets, but many do. Really expensive drugs like the ones discussed in the recent articles are typically not used in canine and feline patients, as cost prohibits their use.

New Is Not Necessarily Better

In the New York Times article I mentioned earlier, the authors lament the approval of expensive new drugs that are not therapeutically superior to old drugs. Ours is a society that values new over old. This value, in part, drives consumer’s desire for new products such as novel chemotherapy drugs. Yet, every day, veterinarians successfully use “old” and, yes, cheaper drugs to treat cancer in their animal patients..

Let's look at my patient Truffy who, like many geriatric pets, has multiple problems including a messy, bleeding mast cell tumor.Mast cells are involved in the body's immune system and are typically found in tissues such as the skin, digestive, and respiratory systems where they mount an inflammatory response when things go awry. Sometimes, however,this response gets out of hand and an invasivetumor forms. His family and I decided radiation and surgery were not good options for him.Treatment with an inexpensive steroid was our first choice. However, itdid not shrink the mast cell tumor one millimeter. We discussed otheroptions and decided to try a somewhat more expensivebut older chemotherapy agent.This drug, which has been in use since 1984, has successfully controlled Truffy'stumor for the past several months while improving his quality of life.It turnedout to be the right optionfor this pet andhis family, and having those kinds of choices is what is key when dealing with cancer.